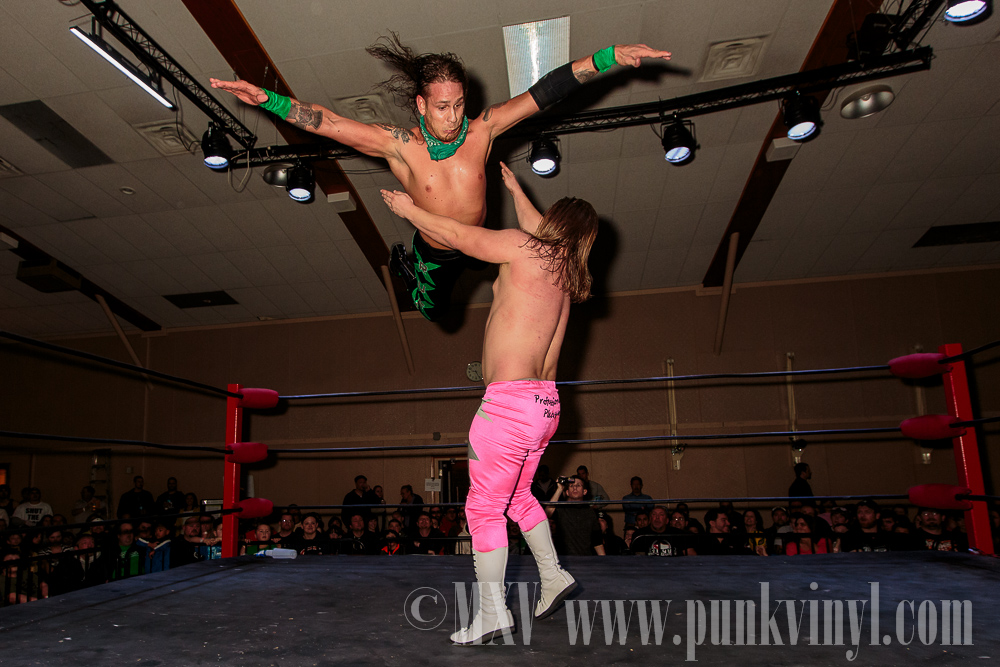 The midwest got dumped on with snow a couple of days prior which made the title of the latest Pro Wrestling Blitz show all the more appropriate. It is the dead of winter but the cold and a few inches of snow didn’t stop a massive crowd from packing St. Joseph Park full for what was the strongest Blitz show from top to bottom to date.

First up was former Blitz champion, Ryan Slade, versus Ashton Vuitton. Slade looked a little disheveled and seems to have taken to drinking a lot to drown his sorrows. In fact he had a flask with him. Ashton took control at the start of the match but eventually was cut off by Slade who then got a little overconfident during the match and let his guard down when he motioned to the photographer to get ready to shoot his finishing move. This gave Ashton an opening to roll up Slade for a quick pin and the victory.

The Ringmaster came out with two of the 3 rings (Machine and Grinn) and stood at ringside as they destroyed the team of Clancy and Jacob Hallows. This match was short and the 3 Rings dominated it the entire time. Big spine busters from Machine and Grin was extra creepy as he took apart his opponents.

Kid Hybrid and Mr. 450 took on Jimmy Rockwell and Zach Thompson in another tag match. Rockwell was escorted to ringside by his new manager/valet, Melanie Cruise! Thompson was escorted to ringside by Rinaldo Piven. This match had a lot of great action and the makeshift team of Rockwell and the unbalanced Thompson worked well together with some butting of heads between the two where in one spot when Rockwell was pointing his finger at Thompson, Thompson bit his finger. Some cheating and double teaming allowed Rockwell and Thompson to steal a win.

In what was originally billed as a “Badstreet Brawl”, Buddy Roberts Jr. (the son of Buddy Jack Roberts of the legendary Fabulous Freebirds) duked it out with Judas (the former Justin Reno before his reprogramming at the hands of the 3 Rings). Buddy was accompanied to the ring by Paul Bearer! When they got to the ring, Paul had a surprise for everyone which was a bunch of druids bringing a casket to the ring and setting it up to turn the Badstreet brawl into a casket match! There was a lot of action in this match and the two beat each other senseless and whipped each other with belts and boots. After a grueling battle, Buddy Roberts got a much deserved victory as he rolled Judas into the casket and closed the lid. The fans really enjoyed this match and Buddy got a big reception and is definitely a star on the rise.

After an intermission with Jerry the King Lawler, Hardcore Craig came out to the ring and called out whoever it was this month that was going to try to collect the bounty on his head that was placed by Matty Starr. Matty came out and told everyone how he found this seven-foot giant at the bar last night where he was drinking and that this giant was sure to be the one to get the ransom. When he called for the guy to come out, he was quite a bit short of the seven-foot claims and it was obvious that Matty was really drunk when he found this guy. The guy was named Prysm and he got his ass handed to him by Craig who beat him from pillar to post. Prysm managed to get a knee in at one point and that was the extent of his offense. When Craig felt like he beat enough of the life out of the kid he ended his pain by pinning him.

If Looks Can Kill came to the ring and one of the member gave a birthday cake to his partner. Their opponents, Hero St. Rebellion came to the ring and interrupted their little celebration and got the tag match started. The caked ended up being spattered in the face of one of the members of If Looks Can Kill. After that it was a messy (thanks to the cake being everywhere) but fast paced tag battle that resulted with the birthday boy and his partner getting the win.

In the main event, Ruff Crossing defended his title against another member of The Elite, Matty Starr. These two had a really enjoyable match with good pacing and a lot of action. Matty gave him a good fight and looked like he might have even been able to take the title but a very drunk Ryan Slade came out with flask in hand and said he was going to help. Rinaldo Piven chastised him and finally got him to leave but the distraction was enough to give Ruff the opening he needed to secure the victory and retain his title. After the match the 3 Rings came to ringside and kicked the crap out of Ruff and stuffed him into a bright yellow body bag and carried him away.

After the match, Tony Scarpone and Billy Whack came to the ring and Billy did a better job explaining why Tony should turn over the company to him. Tony was accompanied by his teenage son and he wasn’t having any of what Billy was trying to sell him. At one point he got really agitated and grabbed Billy by the throat and going to give him a beating when from out of nowhere, The Ego Robert Anthony hopped over the railing and grabbed a chair and leveled Tony with it. He then tied him to the rope with tape so he couldn’t move and then superkicked Tony’s son. The kid fell like a ton of bricks and then Ego put him in a crossface while he and Billy taunted Tony who was helpless to try to save his son. Finally half the locker room came running to ringside to try to help and Ego and Billy fled the building as the Blitz roster freed Tony and helped him get his son to the back for some medical attention.

The packed crowd was hot the entire night and the show was easily the most solid Blitz show from start to finish. Everyone busted their ass in the ring and put on an extremely entertaining show and there’s some good angles that developed or started at this show which should be good. All in all you couldn’t ask for a better way to spend a winter’s night.

Check out additional photos from this event right here!