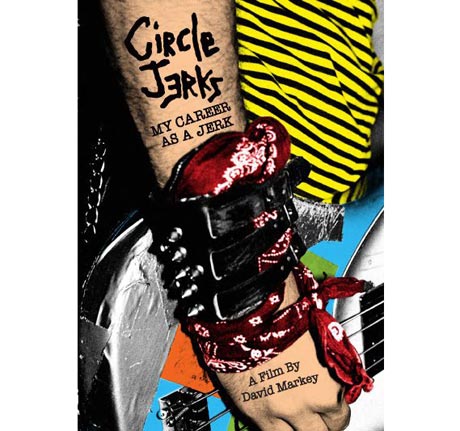 Circle Jerks – My Career as a Jerk DVD

Circle Jerks – My Career As A Jerk
An excellent documentary that pulls no punches about one of all time legendary punk rock bands.
Rating:

The Circle Jerks is one of the earliest and arguably one of the best of the early hardcore bands to come out of Southern California. Formed almost immediately after Keith Morris left a young Black Flag and his buddy Greg Hetson left an even younger Red Cross, the Circle Jerks formed and had a career full of ups and downs that has spanned over three decades now. Members came and left (with one of them dying) and the band enjoyed various small forms of success and failure but the band persevered and until quite recently was at least occasionally active (we will get to that later). The band is a household name when you think of punk rock bands and their first album is among the greatest hardcore punk albums of all time. With a career that lasted as long as the Circle Jerks and with a band as influential as they were, it was only a matter of time before they became the subject of a documentary and that time has finally come with My Career as a Jerk.

Dave Markey of We Got Power films/zine has dusted off his camera to make this documentary and he did an excellent job with it. The film tells the entire history of the Circle Jerks from its inception and what the band members were doing leading up to the band forming, right up until what the status (or lack of status) of the band is now. This documentary is told first hand through current interviews with almost all the key surviving members that have ever played in the band. Band members that were interviewed were Keith Morris, Greg Hetson, Lucky Lehrer, Earl Liberty, and Zander Schloss. Keith, Greg and Lucky were 3/4 of the original band (the fourth being Roger Rogerson who died of a drug overdose many years ago), Earl played bass with the band for a couple of years after Roger left the band and Zander replaced Earl when he left and has been the bass player of the band ever since (and was a co-star of the legendary movie, Repo Man). In addition to the band member interviews there are interviews with people from other bands as well as Lisa Fancher who owns Frontier Records which was the label that put out the first (and best) Circle Jerks album, Group Sex.

The movie goes in chronological order telling the story of the band. They go through the bands formation, the history the members had with other bands before starting this one, the heat they got from their peers for “stealing” parts of songs, recording their various albums and playing shows and touring. They give great detail the how and why various band members left the band,  the substance abuse problems some members had, and they even are quite honest about what did and didn’t work in the band and their various recordings. Interspersed with the interview footage is a ton of live footage from over the years including some really old stuff from the early years which was pretty amazing to see considering how expensive and uncommon video cameras were back then. Some of the footage is of questionable quality and some of it is surprisingly good.

As the film progresses they cover the change in sound to a more rock style in the mid to late 1980s, their hiatus, their increasingly longer and longer spans of time between recording new albums and their short stint on a major label that ended poorly. They pull no punches in talking about where and why the band failed when things were band and they pull even less punches near the end when they get to why the band isn’t currently active and Zander comes off especially bitter when he talks about what led to Keith forming the band OFF!. It is really a great film that is very informative and honest and there was really no attempt to put a spin on anything, it simply presents the facts and stories that each member tells in their own words.

The movie was shot in widescreen 16×9 and is presented as such except for when they show some old live footage which is 4:3. The sound is plain stereo. The film runs about 90 minutes in length and there isn’t a dull moment in the whole movie though some of the poorer quality live footage could have been edited down to be shorter instead of letting them run for an entire song. I understand the historical merit of including the footage but sometimes less is more, especially the one or two clips with really poor sound quality. Extras include deleted scenes and about a half hour of additional interview footage that wasn’t used in the actual film. The extra interview footage was as interesting as the film itself and makes for a very nice addition to the film.

My Career as a Jerk is a great documentary on a legendary punk rock band and is a must for anyone who calls themselves a Circle Jerks fan. It’s a great look at an entire career of a band in a very honest way that comes direct from the source which is sometimes a rarity with band documentaries. It’s equally great to see the We Got Power name active again first with the release of their excellent book and now with this excellent documentary.