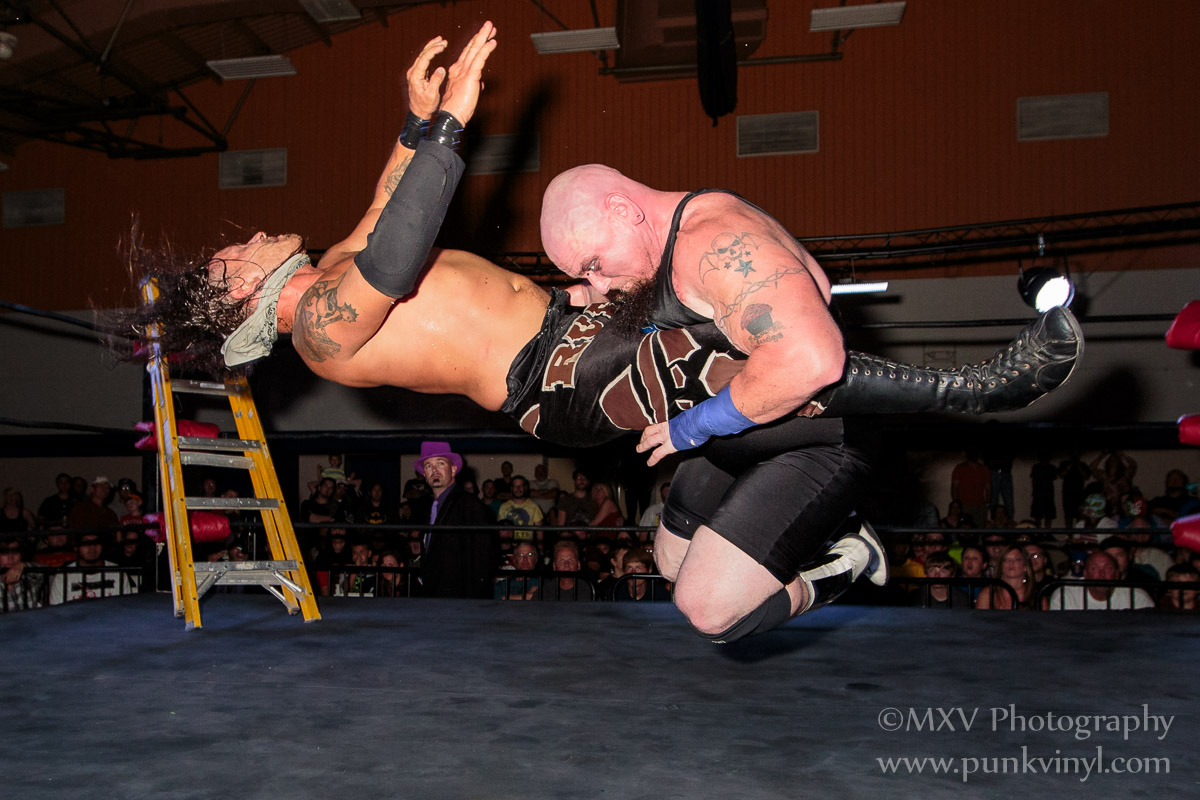 Saturday night was the biggest night of the year for Pro Wrestling Blitz as they put on their biggest show of the year, Wrestlefest. This show was too massive to fit in the confines of their usual venue so they took the action a few miles away over at the Joliet Park District. It was a good thing too because with the great matches and the large number of stars they brought in, the place was packed. This is the company’s flagship show that is their version of Wrestlemania but without the usually bad musical guests. Mr. Ricolo came to the ring to get the crowd excited and he introduced General Manager Michael Brooks who was holding the No Limits title which belonged to Mr. 450. Brooks informed the crowd that since Mr. 450 was unable to fulfill his obligation to defend the title that he had no choice but to vacate the title and there would be a three-way match to determine a new champion. Matty Starr, Buddy Roberts Jr. and Jimmy Rockwell were named as the participants. Just as they were about to get the match started, Melanie Cruise came to the ring and demanded that she be included in the match too. Melanie didn’t want to be involved in the match to help her former client, Jimmy Rockwell, instead she wanted the title for herself and she also wanted to get her hands on Rockwell and give him a beating! Brooks was a little apprehensive of granting her wish but Matty and Jimmy both laughed at her challenge and Brooks gave in and made the match a fatal four-way. Rockwell and Starr formed a shaky alliance and both started beating on Melanie. Buddy did his best to beat on them and avoided tangling with Melanie. Any time the two heels had the advantage they ended up keeping the other one from making a pin so as not to lose the match. Brandon and Melanie both mounted comebacks and in a nice climax to the match, Brandon hit Rockwell with a big move but was then super kicked by Starr who was then powerbombed by Melanie and when she went for the cover, Starr kicked out and Jimmy came back into the ring and clocked her with his framed gold record which broke to pieces and knocked her out. A still semi conscious Matty Starr was close enough to roll over enough to drape his arm over Melanie and get the win and was crowned the new No Limits champion.

Next up was a tag team match with the 3 Rings (Grin and Judas accompanied by Ringmaster) against what was supposed to be the team of Hardcore Craig and Pauly Thomaselli. Craig came out from backstage and said that Pauly wasn’t there and it wasn’t going to stop him from fighting alone if he had to. He came to the ring and was instantly attacked by both his opponents. When it looked like he was going to suffer from being outnumbered, Ryan Slade came to the ring and said he would be Craig’s partner. Craig seemed puzzled by it as it was only a few months ago that Ryan and the rest of The Elite were trying to put him out of wrestling in order to collect Matty Starr’s bounty. Maybe Ryan had a change of heart or maybe he just respected Craig because they both like to drink but regardless he joined Craig and helped win the match, or at least temporarily win it. Ryan had a crossface on Judas and he quickly tapped out which won Craig and Ryan the match but Ryan wouldn’t let up after the bell rang and after numerous pleas from the referee to break the hold, the referee reversed the decision and the match was then awarded to the 3 Rings.

Billy Whack and The Ego Robert Anthony came to the ring and talked a lot of smack about their LWF title and Tony Scarpone. This led to Ego issuing a challenge to defend his LWF title which he has held for the past 3000 something days. WWE/TNA/ECW legend, Al Snow,  surprised everyone when he came out and accepted his challenge after a little verbal sparring back and forth. This was a really good match with a lot of excitement and some cheating by Whack and Ego which led to two referees being knocked out. Al put up a hell of a fight and was going to win but the shady tactics of Ego and Billy were too much and Ego got the tainted win. After the match two masked goons gave Al Snow a beat down and Tony Scarpone came out and made the save and then chased Ego out of the ring. Michael Brooks also came to the ring and he and Tony informed Ego that the restraining order he had against Tony expired that morning so now Tony is free to kick his ass which he plans to do at next month’s show. This match has been a long time coming as Ego has been a thorn in Tony’s side dating back to last summer!

After the dust settled and Al came to, Mick Foley came to the ring and talked a bit to the crowd about friendship and asked them to sing along with him as he sang “For He’s a Jolly Good Fellow” to Al. The two shook hands and Mick playfully pretended like he was going to hit him every time he turned away. Mick got a huge ovation from the crowd who before the show lined up around the building to meet him and get an autograph. After the intermission it was time for another tag match which featured two more former WWE superstarts. This time it was Rikishi and Scotty 2 Hotty vs. If Looks Could Kill. After a light-hearted pose off between the two teams the action got underway and If Looks Could Kill spent a bit of time beating up Scotty and keeping him away from Rikishi. Eventually Scotty was able to break free long enough to make the hot tag to Rikishi who cleaned house and kept control. He was about to put the stinkface on one of his opponents when he took a shot to the family jewels which the referee saw and ended the match via disqualification. After the announcement Rikishi and Scotty got a little revenge by Scotty doing the worm on one guy and Rikishi stinkfacing the other. The crowd popped huge for both of these and afterwords the two legends danced in the ring which got another big ovation.

The returning Barry Ryte turned over a new leaf and decided that for his return to Blitz he would no longer cheat to win and instead try to be more honorable. He faced Zach Thompson and the two had a really solid match with good action and nice pacing and it was a pretty even match with Barry doing a couple of flashy moves. Zach tried to get the win by rolling up Barry in a small package but Barry was able to roll it back over and hold him for the three count. The fans enjoyed the match and seemed to appreciate the clean win for Barry.

The main event featured Blitz champion Ruff Crossing defending his title against Machine from the 3 Rings. The 3 Rings have been chasing Ruff’s title for months now and Machine was the only member who hasn’t tried and failed to take the title. Machine also happens to be the biggest and strongest of the group so Ruff wasn’t going to have an easy night especially because this was a last man standing match. The rules dictated that anything goes and the loser is the one who can’t get back to his feet by the count of ten. As soon as the bell rang Ruff wasted no time trying to beat the life out of Machine and get him down but Machine is very hard to get off his feet, let alone knock out and he fought like hell to get that title. The two used a ladder, a cowbell, a trash can and the title belt as weapons and the Ringmaster did his best to interfere as well but they couldn’t keep Ruff Crossing down for the ten count. The problem was Ruff couldn’t do the same either even after splitting Machine’s head open with the cowbell. Finally after a grueling battle, Ryan Slade came to the ring and saved Ruff from losing when he clocked Machine with a chair not once but twice. Ruff then was able to hit Machine with a jumping piledriver onto a trash can which hurt Ruff’s ass almost as much as it put down Machine and Ruff got the win. When the bell rang out came the rest of the 3 Rings to start beating on Ruff again to get revenge for their loss but Al Snow came in and made the save. When Ruff got back to his feet, Al issued a challenge to him for the title at next month’s show which Ruff accepted after saying he respected Al for coming out and making the challenge man to man.

Wrestlefest 4 was a huge show that was fun from start to finish. Everyone put on one hell of a great show and it had a real “big show” feel to it. It was a great night to be a wrestling fan and next month’s show already looks like it will build nicely on the momentum of this one and will be another must-see event. For additional photos from Wrestlefest 4 click here!