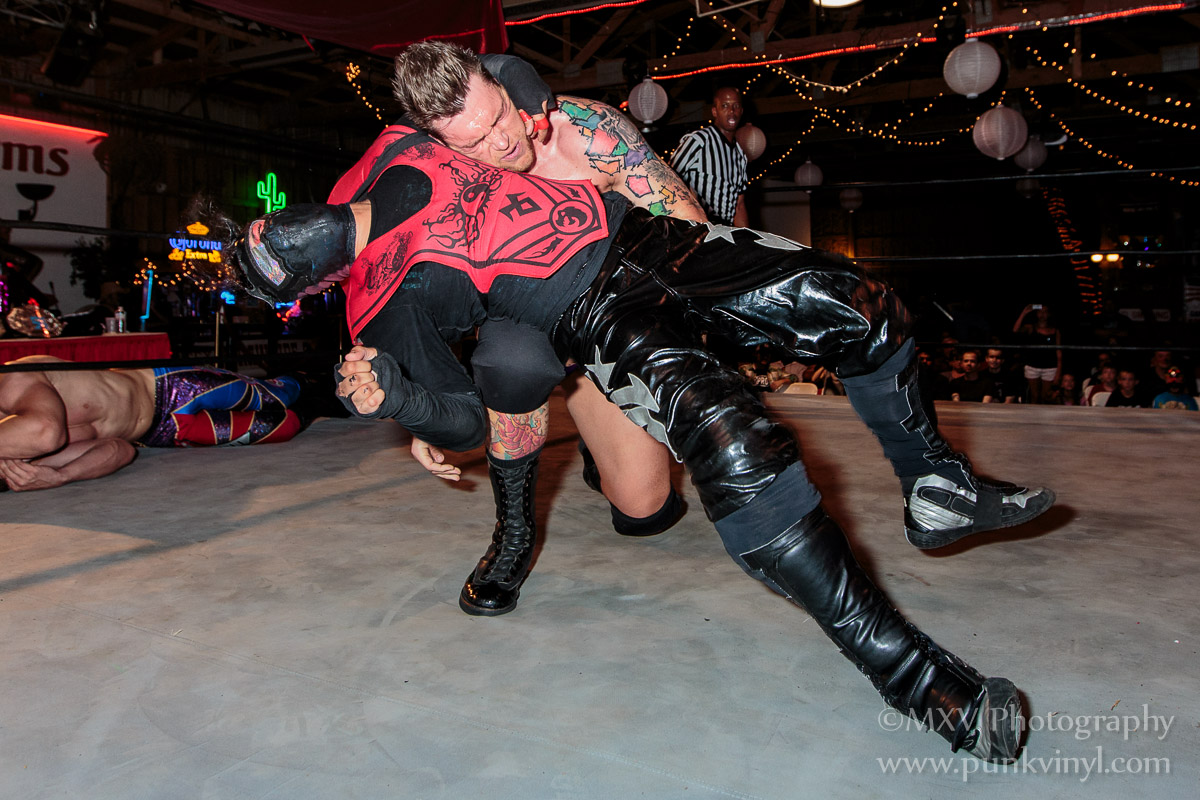 After a one month hiatus, Resistance Pro Wrestling returned on Friday night for their latest event, Stick It To Ya. It was held at the Barn at Arabian Knights farm and this was the third time the federation has held a show there. They didn’t bring in any big names for this event and instead they used the entire show to showcase their own talent in an action packed card. Since its inception the company has been known for the high-caliber of talent on their roster and this night was certainly no exception. The show featured two title matches and an excited ten man tag team main event.

The show had one dark match and it was a triple threat match with Eddie Graves, Jay Bly, and Kharn Alexander. This match was about five minutes in length and was a pretty standard match with two guys forming a short alliance and then turning on each other. The match had a good pace to it and resulted in Graves getting the win after kicking one of his opponents in the face, capitalizing on an opening to sneak in and win.

Special guest announcer Mr. Ricolo came out and got the show started by introducing the teams who will be in the main event for the evening. This led to “Team Ego” and “Team Jocephus” coming out to the ring. They all set up the special stipulation for the match in that the surviving members of the winning team get to choose any match they want in RPro. This was a very cool and unique spin on a tag-team elimination style match and there was a lot of talented wrestlers involved that all could benefit from such a thing. After some verbal back and forth between the teams they left the ring so the first match could get started.

Scotty Young faced Lance Storm wrestling academy graduate Jake O’Neil. These guys were pretty evenly matched with the fans clearly favoring Young who won the match. Solid work by both members made this a good way to start the show.

Matt Knicks came up short in his attempt to best Remi Wilkins in the second match. Wilkins attacked him before the bell even rang and made short work beating the crap out of him and pinning him in just a couple of minutes. Knicks didn’t stand a chance in this one as he wasn’t able to recover from the pre-match attack and this was probably the shortest match of his career. Wilkins showed a whole new mean side of himself in this and it used poor Knicks to make an example of. Don’t be surprised to see a lot more of the meaner Wilkins in future shows as he is a man on a mission.

Next up was a ladies tag team match featuring Nikki St. John and newcomer Camron Star versus fan favorite, Thunderkitty and Lucy Mendez (who returned to RPro after a lengthy absence). Nikki and Camron spent most of the match beating the crap out of Thunderkitty but she wouldn’t give up and kept kicking out and trying to get to her partner. Her efforts were cut off every step of the way and when she finally did make a hot tag to Lucy it didn’t take but a minute or two for her to be overpowered and the team of Nikki and Camron won the match. After the match Zach Thompson came to the ring to interview Nikki about the prospect of having a ladies tag team division which Nikki said they should name after her because she’s going to dominate it.

Barry Ryte had the unfortunate luck of being put in a match with a much bigger Jon Malus. Ryte was accompanied to the ring by Colonel Jesse Corgan and Miss Prig. Ryte looked pretty scared of Malus and rightfully so, the guy is a beast. When the bell rang, Ryte did his best to keep running away from Malus but he wasn’t able to go far before getting nailed by one big move after another. Ryte even managed to get some offense in during all his running around. He’s a sneaky opportunist which he proved when after getting hit by a TKO that easily was going to lead to the three count, Miss Prig came to the ring to distract Malus which bought Ryte enough time to get his wits about them. When Malus looked like he was about to kill Miss Prig, Jesse Corgan came in to the ring to protect her and while the referee was distracted Ryte hit Malus with a low blow and a fameasser which got him the victory. This match was very entertaining and Ryte is great in his role as the scared but sneaky underdog.

The tag titles were on the line when Lock Up defended their belts against Mad Man Pondo and Brady Pierce. Lock Up took a beating at the hands of Pondo and Pierce early on but quickly turned the tables (and shipping pallet, and staple gun) on the two P’s and after dropping Pondo on the pallet spent most of the rest of the match trying to break Pierce’s leg. Pondo was so hurt from that pallet that he was taken to the back which left poor Brady helpless and outnumbered. Eventually Pondo got it together enough to limp back to the ring but it was too little too late and Lock Up got the win. Pierce was livid with Pondo and blamed him for their current losing streak. When Pondo tried to apologize and calm him down he got a big slap to the face for his troubles and Pierce walked out.

D’Arcy Dixon put her newly won ladies title on the line against the veteran Mickie Knuckles. The two held nothing back as they engaged in a long grueling battle for that belt. They traded blows inside and outside of the ring and after Mickie slammed D’Arcy on the floor outside so hard that she almost broke a hole in it, she proceeded to punish D’Arcy as long as possible in hopes of keeping her down. D’Arcy never quit and fought back hard every chance she got and even suplexed Mickie onto the ring steps. When they got back in the ring it was more battling back and forth with D’Arcy surviving everything Mickie threw at her. Mickie tried to superplex D’Arcy off the top rope but D’Arcy was able to block it and then slip down to grab Mickie for a power bomb which got her the pinfall. This match was intense and D’Arcy proved why she is the champion. This match was easily the best one on the card and really impressed the crowd who will now have greater respect for the champ.

In the main event, Team Ego (The Ego Robert Anthony, Lonesome Jay Bradley, Da Cobra, Ruff Crossing, and Willie Richardson) took on Team Jocephus (Jocephus, Vector A, Ashton Vuitton, Trevor Court, and a mysterious masked wrestler named Los Angle) in a 10 man tag team elimination match. There was so much action in this match that it was hard to keep up but it was extremely exciting and in one big spot pretty much every member of both teams one by one jumped out of the ring into a pile of contestants outside the ring, including big Willie! That really got the crowd excited and after that slowly but surely people started getting eliminated. Team Jocephus started to dominate near the end and eliminated everyone but Ego. Ego put up one hell of a fight but the numbers game was too stacked against him and he ended up losing to team Jocephus who still had three members in the match. Those three wrestlers now get to choose anything they want in RPro. Jocephus clearly wants a title shot and Vector A wants to take over the company with Jesse Corgan but it was unclear what Los Angle wanted as when interviewed he spoke gibberish although it did sound like he said the word “Ego” in there somewhere but it was really hard to tell.  If that’s the case then the champ is going to really have his hands full as he will have two different people gunning for his title.

Stick It To Ya was well worth the long wait since the last Resistance Pro show and it raised the stock of nearly the entire roster once again with a solid and fun show that really satisfied the crowd on Friday night and it’s a safe bet they will all be back for more the next time out.