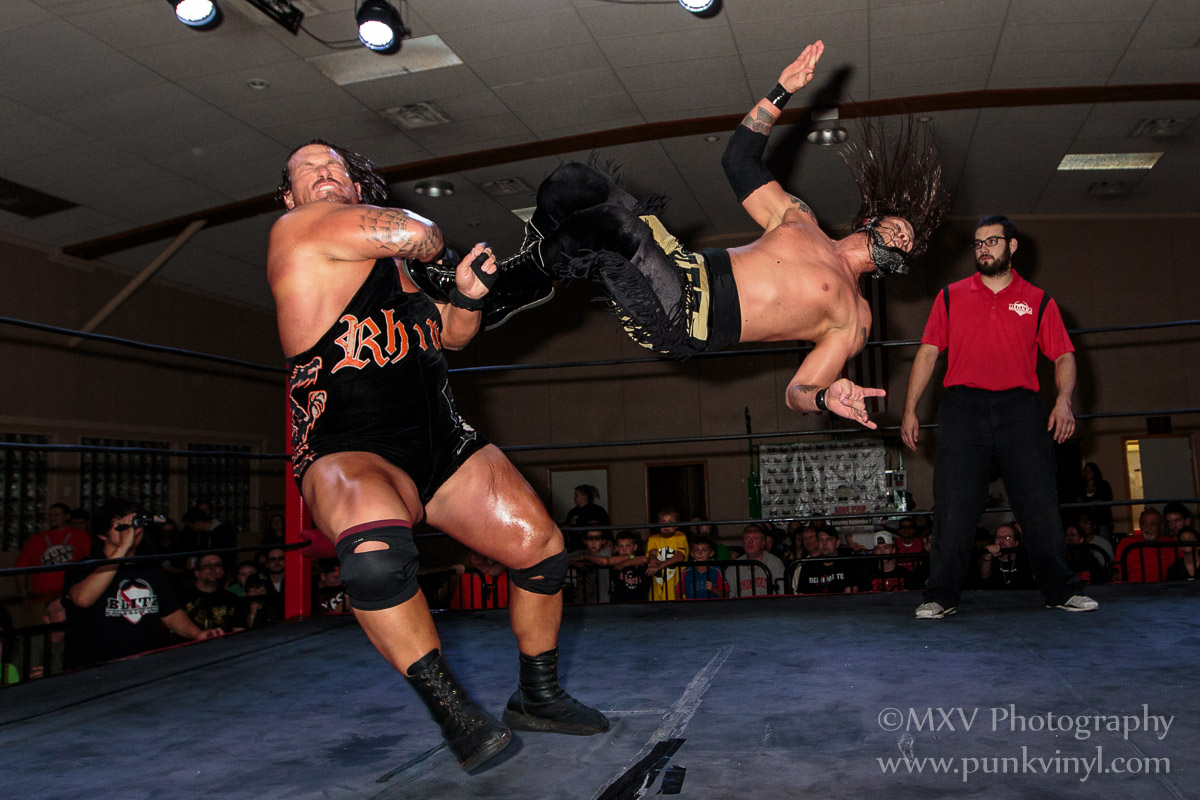 Saturday night Pro Wrestling Blitz returned to its home base at St. Joseph Park for their latest event, Fallout. They brought in two superstars for the show to go along with their very talented roster of future stars and both titles were also on the line in different matches.  Mr. Ricolo was the ring announcer for the evening (as always) and he got the crowd warmed up as he introduced the first match.

First up was a mixed tag team match that saw the team of Zach Thompson and Jimmy Rockwell vs. Buddy Roberts Jr. and Melanie Cruise. Melanie used to be Jimmy’s manager until the two had a falling out a few months ago and Jimmy has been a thorn in Melanie’s side ever since, often physically attacking her. The match started off with Jimmy refusing to give Melanie the satisfaction of facing him in the ring and instead made Zach start for their team. Melanie and Buddy gained control rather quickly and kept the heels in check for a while until they started to pick up the pace. Melanie was cleaning house and kicking the ass of everyone in sight until Jimmy grabbed his guitar and broke it over Melanie’s head, ending the match. The referee called for the bell and disqualified Jimmy and Zach and a bunch of people came out to help Melanie into the back where she could get some medical attention. This was an exciting but brief match that made Melanie look as strong if not stronger than many of the male wrestlers and the crowd went crazy when she started kicking ass and hitting big moves on the guys.

In a singles bout, Ashton Vuitton faced Nick Cutler. This match was a pretty by the books wrestling match with good action and good reversals. The two were pretty evenly matched as they traded holds and tried to one-up each other. When Ashton was rallying a good comeback he went up to the top rope and attempted a high cross body but Cutler rolled through it to cover Ashton for the pin. It was a very respectable win and Ashton realized that he got outsmart and was a good sport about it. He reached out to offer to shake Cutler’s hand out of respect for the clean win and Cutler thought about it for a second, then shook his hand. When Ashton went to take his hand back and leave the ring, Cutler pulled him back in and punched him in the face. The bewildered Ashton was then left scratching his head and looked more than a little pissed off, if not freaked out by what happened.

In the first of two title matches for the evening, Matty Starr defended his newly won No Limits title against Barry Ryte. These two really gave it their all and Barry made up for the size disadvantage by being quick and agile. He gave Matty one hell of a fight and looked ready to take the title from him but when the referee turned around, Matty hit Barry with a low blow and then rolled him up to steal the win and retain his title. Matty was very proud of himself after the match. Jimmy Rockwell came back to the ring for some reason too and when he was in the ring the lights went out for a minute and when they came back on, ECW/WCW/WWE legend, Rhino was in the ring and leveled Rockwell with a gore. The crowd popped huge for this and the roof almost caved in from the roar of the crowd. Rhino then took a mic and said that he heard Al Snow wasn’t able to make it tonight (Al was supposed to challenge Ruff Crossing for the Blitz World Title) and that he was there to challenged Ruff for the title instead. The crowd loved the sound of that and excitement was in the air for the main event.

After Rhino left the ring, Matty Starr came back to the ring and decided he was going to have a dance party with himself and his No Limits title. He danced around like a goof for a couple of minutes until  WWE/WCW legend Ron Simmons came into the ring behind him. As Matty “backed his ass up” dancing, he bumped right into Simmons who just stood there with a stern look on his face. Matty turned around and was shocked to see Simmons standing there, then tried to get him to join his dance party. Simmons would have none of it and just stared him down until Matty stopped dancing. Ron then looked Matty up and down and shouted his trademark, “Damn!” which made Matty fall to the mat. The crowd loved every minute of it!

Tony Scarpone came to the ring to announce to the crowd that in 2014 there will be a tag team tile for the first time in the company’s history. He also introduced the team of The Shogun Chris Logan and Dynamite Jackson which he said to have hand-picked to participate in the tag team division. Tony must not have taken enough time to truly screen his candidates properly as his team didn’t fare so well against If Looks Could Kill. Dynamite spent so much time being beaten up by If Looks Could Kill that by the time he made the “hot tag” to Shogun it was more like a cold tag. Shogun came in like a ball of fire and cleaned up which got the crowd back somewhat. He even managed to win one for the team though he did it by holding the trunks to get a dirty win. Scarpone chastised him for the unsportsman like tactics and then Billy Whack came to the ring and interrupted him. Billy went on some more about how Tony owes him money for a contract that he signed back in the LWF days and then started to taunt Tony about how he’s always five steps ahead of him. When Tony turned around, Shogun super kicked him and knocked him out. The Three Rings then came to the ring and everyone ganged up beating Tony down while Billy went on a lengthy tirade. Hardcore Craig and Pauly Thomaselli came and made the save which led into the next match.

Craig and Pauly fought Judas and Machine in a tag match that was more of a tag brawl and the two teams spent a great deal of time outside the ring beating each other senseless all over the arena. Many fans were given a super close up view of the action as various wrestlers landed in their chairs. The action was crazy and too much for the referee to contain and the match ended in a no contest. After the match Hardcore Craig brought his daughter into the ring and announced that it was her birthday and asked the crowd to join him in singing happy birthday to her. The crowd happily obliged and Craig’s daughter was so moved by it that she almost cried. It was definitely the “feel good” moment of the night.

In the main event, Rhino challenged Ruff Crossing for the Blitz heavyweight title. These guys had a great brawl that initially spilled out onto the main floor where they chopped at each other like a lumberjack chops down trees. Once back inside the two went toe to toe for quite some time and had a grueling fight. Rhino was the more powerful of the two combatants but Ruff was able to keep the fight going no matter what Rhino hit him with and give just as much back at them. In the end it was a missed gore that cost Rhino the match. The two shook hands after the match as a sign of respect and the crowd gave a huge round of applause for it. The celebration was short-lived however as the Three Rings and Shogun and Billy Whack came back to attack Ruff Crossing after the match but a lot of the babyfaces from the locker room came out to Ruff’s aid which ended the chaos and brought the event to a close. Mr. Ricolo came out and thanked the crowd for coming and wished everyone a good night.

Fallout set the stage for a couple of very interesting and exciting things for the October show and was yet another fun night of professional wrestling which the company has been delivering a lot of this past year and it looks like their hot streak will continue for quite some time.