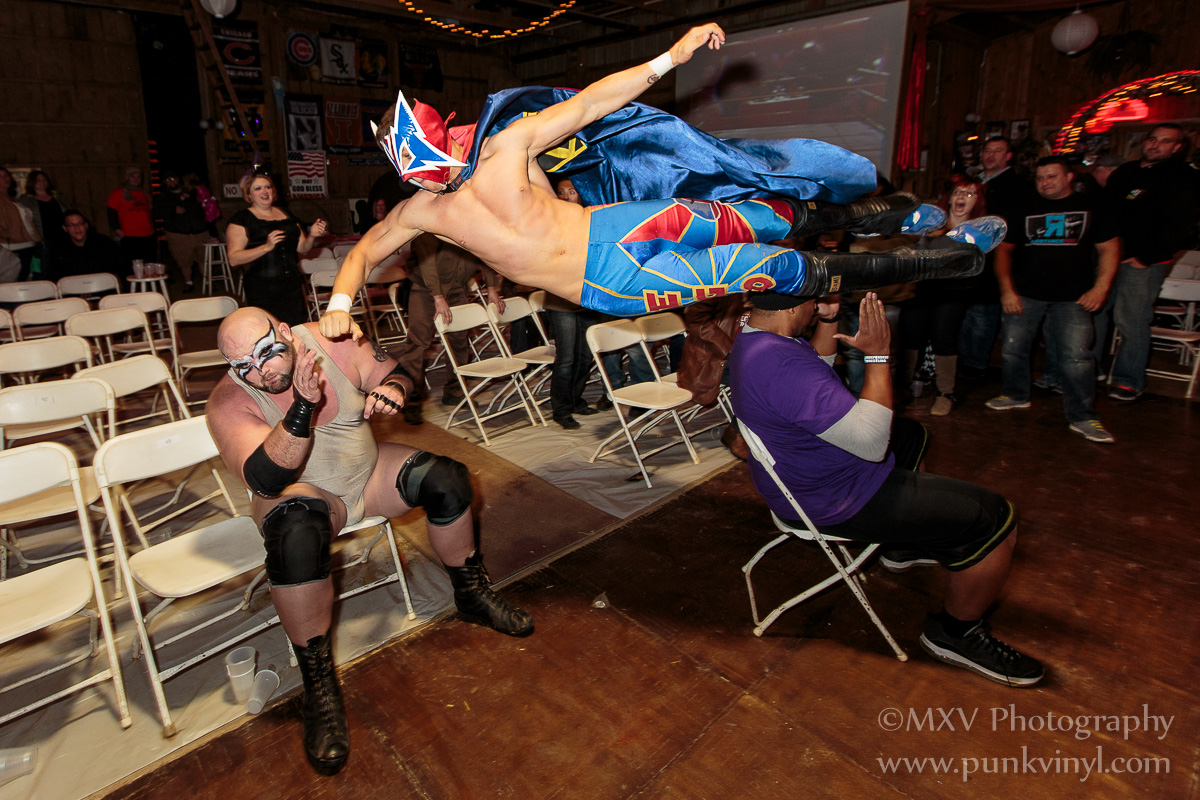 Halloween is almost upon us so Resistance Pro Wrestling had an appropriately themed show on Friday night titled Welcome to My Nightmare. The staff, talent, and many in the crowd came dressed in costumes and they even had the Son of Svengoolie as the special guest! On top of the great wrestling they had costume contests for the talent and the audience so there was something fun for the entire family.

There was a dark match before the show started that was a fatal four-way. The match was a fairly short but action packed one that gave each wrestler a short time in the spotlight that led to Jacob Black winning the match. A second dark match saw Team IOU return to RPro to defeat The Painkillers in a tag match.

When the show got started Son of Svengoolie came out to the ring and hosted a costume contest for the wrestlers. Nearly the entire roster came out from the back in costume. There were some really good ones that included a Ghostbuster, the Fly, Jay and Silent Bob, a Lumberjack, He-Man and more. Svengoolie took a poll of the crowd and based on their reaction it was Thunderkitty who was dressed in the baseball outfit from A League of Their Own that got the biggest applause and she was declared the winner. After that Colonel Jesse Corgan took the mic and insulted Svengoolie and the crowd and then said that he would be getting his revenge on The Ego Robert Anthony in the main event when his client, Vector A, beats Ego for his title. He then turned to Vector A and told him that if he fails then he is fired.

In the opening bout, Lock Up defended their tag titles against the Two Star Heroes. Shug D was dressed as a basketball player and had a ball and insisted that the match start with a tip-off. This got the entire audience laughing and when the ref tossed the ball in the air, Shug grabbed it only to be greeted with an atomic drop on his way back down. From there it was non-stop action including a lot of great double team moves from both teams and high energy. Lock Up really had to work their asses off to hold onto those belts and they may not have been successful had it not been for Epic cheating and using a nightstick to aid in victory when the referee wasn’t looking. It was a cheap way to win but what do you expect from a convict? The Two Star Heroes definitely deserve a rematch!

Jake O’Neil came to the ring to tell the audience how sick he is of looking at and wrestling Scotty Young as this show marked the third show in a row that they faced each other. Since they were tied at a match each it only seemed natural that they had one more match to determine who the better man was. The two once again put on a wrestling clinic and delivered a rock-solid match with a lot of good back and forth action and trading of holds. These two have good ring chemistry together and put together one entertaining match. Scotty Young was able to take the win this time with a Texas Cloverleaf submission hold. Jake seemed none too happy about his loss and this may not be the last time fans see these two face each other.

Resistance Pro has the best women’s division in the wrestling business because their women can actually wrestle. The women’s title is every bit as prestigious as the world title and five women vied to be the number one contender to the title in a “first come last served” match. The way it works is it is an elimination match where whoever gets the first pinfall gets to sit out the rest of the match until there is only one other person left who she then faces one on one to determine the number one contender. It is an interesting gimmick and the five ladies really gave it their all. Mickie Knuckles scored the first fall and got to take a breather while the other four ladies (Thunderkitty, Lucy Mendes, Jordynne Grace and Camron Star. When the dust settled it was Mickie Knuckles who totally dominated and earned the title shot which means she’s got another chance to beat the hell out of D’Arcy Dixon which is going to spell trouble for D’Arcy based on their recent history.

Ashton Vuitton, Barry Ryte and Da Cobra faced each other in a triple threat match where the loser of the match would be fired from RPro. No one likes getting fired and the three of them really went to town on each other to try to prevent that from happening. Ashton and Barry even formed a temporary alliance to try to take out Da Cobra but that didn’t last long as Ashton turned on him the first chance he had in hopes of winning the match. Da Cobra made a big comeback and had Barry down and out but Eric St. Vaughn pulled him off of Barry and out of the ring which gave the opportunist, Ashton, the opening to cover Barry and get the win. Barry was in shock and clung to the ropes, refusing to leave but Michael Bradley, head of security, picked him up and carried him off kicking and screaming. While this was going on, Cobra confronted Ashton in the ring about him stealing the win which Ashton responded to by hitting him with a Novacaine.

During the intermission, Svengoolie had a costume contest for the kids in the audience and gave out prizes for the best costumes. The winner was an adorable Dorothy from Wizard of Oz.

The two largest men in RPro spent about 15 minutes beating the crap out of each other; the men in question were Jocephus and Lonesome Jay Bradley.  These guys threw everything but the kitchen sink at each other and the only reason they didn’t throw that was because it wasn’t a “no DQ” match. Jocephus used his brawling skills to try to pound Jay to death and Jay tried to outsmart the big guy by out wrestling him. These guys traded blows and holds back and forth and slowly increased the size of the moves they delivered including kicking out of each other’s finishers. Jocephus was the better man this evening and won after a devastating choke slam on the already battered and bruised Bradley but Jocephus was hurting just as bad when the bell rang.

A “four corners” match was held to decide what tag team will be the number one contenders. Ruff Skies, Love/Hate, Pondo/Pierce and Da Soul Touchaz were the teams and each of them wanted this title shot bad. Pondo and Pierce had been having troubles recently as they’ve suffered a lot of losses which they blame each other for and always seem to end up bickering; the bickering came to a head during this match when Pondo had enough of Pierce’s attitude and finger-pointing and laid him out with a DVD and left him out to dry. After that there was a lot of fast paced chaotic action which ended when big Willie pounced Skyler and pinned him to make Da Soul Touchaz the number one contenders for the tag titles and allows them to once again get their hands on Lock Up in hopes of taking those belts from them.

Crazy Mary Dobson had been absent from RPro for a few shows while she was over in Japan kicking ass and sharpening up her skills. She returned looking better than ever and wrestling better than ever as she attempted to beat D’Arcy Dixon for the women’s championship. These two put together a very good match that was better than any ladies match you’d see in the “big two” on TV every week as these ladies can actually wrestle. Mary put up one hell of a fight and had the advantage for a good portion of the match but D’Arcy was able to counter when Mary went up to the top rope one too many times and she dumped Mary onto the mat in what looked like a powerbomb but looked more like she dropped Mary on her head. It was enough to get the victory though and when the bell rang and Mary got up the two shook hands and hugged in a great show of respect and good sportsmanship. Hopefully these two will have a rematch some time in the future as they worked well together and could easily have a nice lengthy program together that would be exciting for a number of repeat matches.

The Ego Robert Anthony had his work cut out for him when he had to defend his title against Vector A in the main event. Not only did he have an opponent who had everything to lose if he didn’t win the match but he had Jesse Corgan and Miss Prig out there at ringside to make his life even more difficult. Vector A had no intention of losing the match and being fired so he took the fight to Ego inside and outside the ring and his large size meant he had the power advantage and he used it every chance he could. Ego is no slouch and never quits no matter how much of his ass gets kicked and he gave back every bit the ass kicking that he was receiving. Try as he did, and with interference, it wasn’t enough to keep Ego down during their long, grueling match and Ego hit the Death Valley Driver on Vector A to score the win and retain his belt. After the bell ran the furious Jesse Corgan went to the back and then returned with The Almighty Sheik who had been gone from RPro for a year! The Sheik attacked Vector A and they fought around the crowd for quite some time and then when the Sheik entered the ring, Jocephus came out and attacked him and  choke slammed him and left the arena which drew the event to a close.

Welcome to My Nightmare was anything but a nightmare; it was instead a wrestling show that was fun for the whole family and set up some great matches for the company’s next show which marks their two-year anniversary and things can only get better from there!