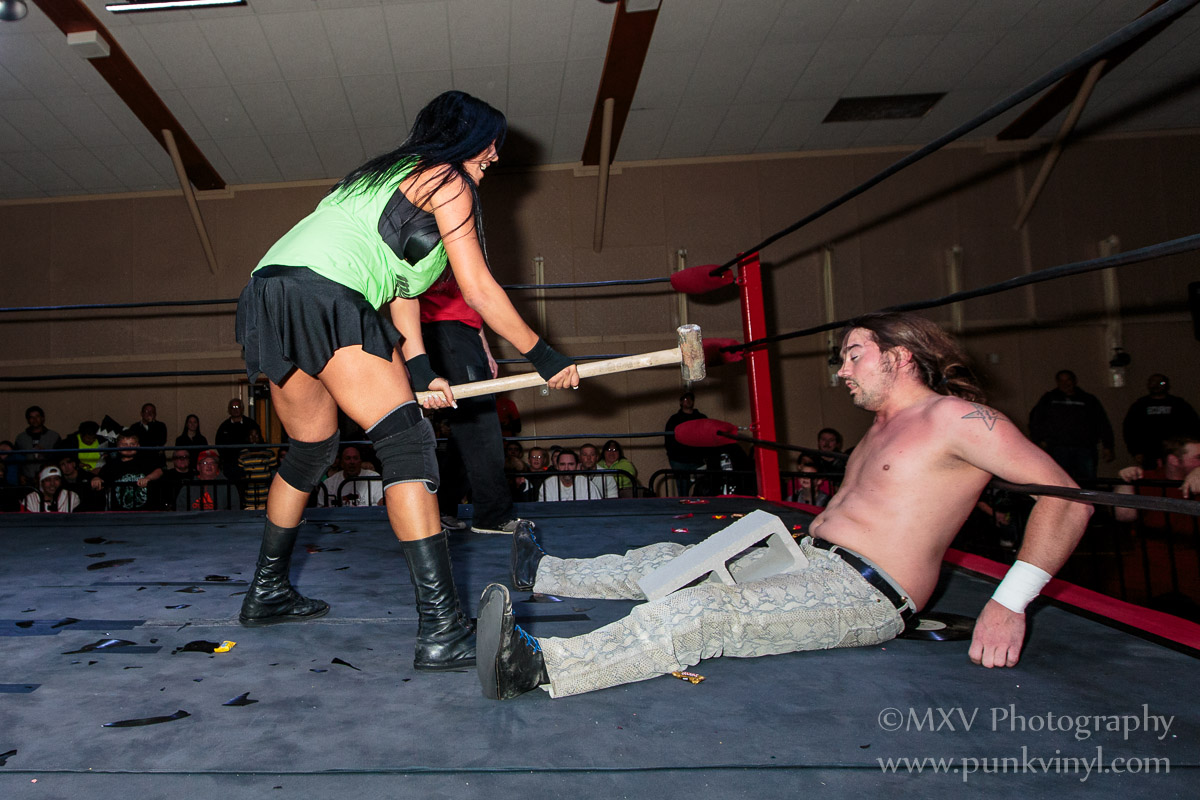 It’s an October tradition in Pro Wrestling Blitz to have a Halloween themed show titled Hallowcade and that event took place on Saturday night. A large crowd gathered at St. Joeseph Park to see the regular cast of characters along with the special guest, Demolition.

The 3 Rings and Billy Whack came out to the ring along with Chris Logan and it turned out they had tied up Mr. Ricolo so they could hijack his opening segment. They introduced the newest member of their union, Vic Capri who was ousted from Blitz a year ago. Vic had a bone to pick with Tony Scarpone for kicking him out of Blitz and wants to get even. He said he wanted a match and to make things fair, he would wrestle two people instead of one. Dynamite Jackson and Clancy answered the challenge and the match was worked as a handicap tag match. Clancy and Dynamite gave one hell of an effort but Vic bested the both of them and won the match.

While this match was happening Tony Scarpone managed to find and free Mr. Ricolo and the two of them came to the ring. Ricolo was disheveled and pissed off and Tony was also pissed off. They, along with Hardcore Craig chased everyone out of the ring and returned some order to the show.

Buddy Roberts Jr. and Barry Ryte tagged up against Matty Starr and Zach Thompson. This was a fun match that saw the heels (Zach and Matty) fighting dirty and Buddy and Barry upstaging them with frequent tags and flashy moves that got the crowd excited. Matty and Zach used some shady tactics at times but it wasn’t enough to lead them to victory and this new team of Buddy and Barry got a well deserved victory.

In a “trick or treat match” Melanie Cruise had the opportunity to get her hands on Jimmy Rockwell and give him a long overdue beating. The rules of the match was it was no DQ and hanging on each ring post was a bag that either contained treats (candy) or tricks (weapons). Jimmy had bad luck because the two bags he picked had candy while the two Melanie was able to grab both had weapons. Jimmy had a few moments where he was trying to choke out Melanie but for the most part she spent most of their brief match beating Jimmy up to the delight of the entire audience. She had a chain that she pounded him with and a stack of records that she broke over his head but for her final act she knocked him loopy and propped him up against the bottom rope where she placed a cinder block over his privates and smashed it with a sledge-hammer! Every male member of the audience cringed as they reached for their own privates and commissioner Michael Brooks came running out from back stage and stopped the match. Melanie was pissed but seemed proud of herself for making sure the world would be free of any future little Rockwells and Jimmy was carried out as he was unable to walk. Later on in a backstage video while Jimmy was icing his nuts he told Michael Brooks that he has a twin sister who wants to fight Melanie next month and Brooks agreed to put her in a match.

Billy Whack declared The Shogun Chris Logan the new LWF champion which immediately swelled Logan’s head up enough that he decided he wanted even more gold and he challenged Ruff Crossing for the Blitz title. Ruff, ever the fighting champion, accepted the challenge and the two had a title match after the intermission. Ruff took charge early but thanks to some interference from Billy Whack, Logan turned the tables on him. If that wasn’t enough, The Ringmaster sent some clowns to the ring to also interfere and this pissed off Ruff so bad that he grabbed a chair and wailed on Logan right in front of the referee who had no choice but to disqualify Ruff. It was a very good brawl while it lasted.

In the main event, Tony Scarpone made his return to the ring to team up with WWF legends, Demolition, against The 3 Rings. Demolition and Tony kept control for most of the match and were able to keep the Rings from gaining the advantage for very long. This just served to frustrate the 3 Rings and the Ringmaster and they tried every dirty trick in the book to gain the advantage including the Ringmaster slipping a rubber chicken with a pipe inside of it to Grin for him to use on their opponents but the referee caught him and called for the bell, disqualifying the 3 Rings. After the match it was declared that at next month’s show Craig and Pauly would find a partner to face the 3 Rings in a steel cage match and Tony Scarpone and Ruff Crossing will face Vic Capri and Chris Logan in a tag team match.

Hallowcade was an action packed show that had a hot crowd the entire night and set the stage for some big matches next month too that should do well to pack the house once again.