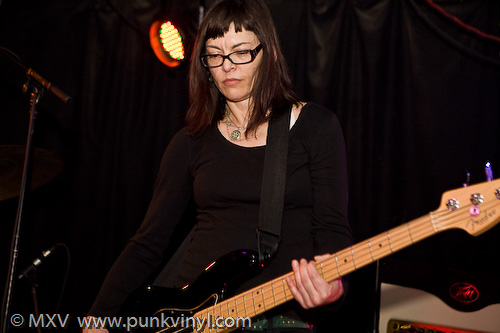 I’ve had to write way too many of these recently and this one hits a lot closer to home than most. Lorna Donley, singer/bassist for the Chicago punk/post-punk band, DA! passed away. Lorna was involved in the original Chicago punk scene and her band, DA!, appeared on the legendary Busted at Oz compilation as well as releasing a 7″ and a 12″ EP before disbanding. They were an excellent band but often overlooked by many outside of the area. Lorna appeared in the Chicago punk documentary, You Weren’t There and DA! ended up doing a reunion show sometime after its release.

I was a little too young to have seen DA! when they were an active band. I ended up meeting Lorna when a friend of mine was dating her and brought her over to my house when I threw a party. Lorna was incredibly kind and she was flattered that I had saved her band’s records all these years and held them in high regard.  We became friends but our paths didn’t cross very often but it was always good to see her when I’d run into her somewhere and chat with her. She was a talented musician and she was also very intelligent and an all around good person. It was a real treat for me to finally get to see her band play when they did a reunion show at the Empty Bottle in 2010.  I think that may have been one of the last times I talked to her in person though we had messaged each other on facebook more recently than that.

Hopefully Lorna is reuniting with other lost friends and loved ones at the big Oz/O’Banions, etc. in the sky. If there really is an afterlife, it just gained a wonderful person who left this world way too soon and will be missed by her friends, family, and fans. R.I.P. Lorna, thank you for the wonderful music you left behind and thank you for your friendship, however brief it was.

For those of you who may not be familiar with DA! then check out these videos: