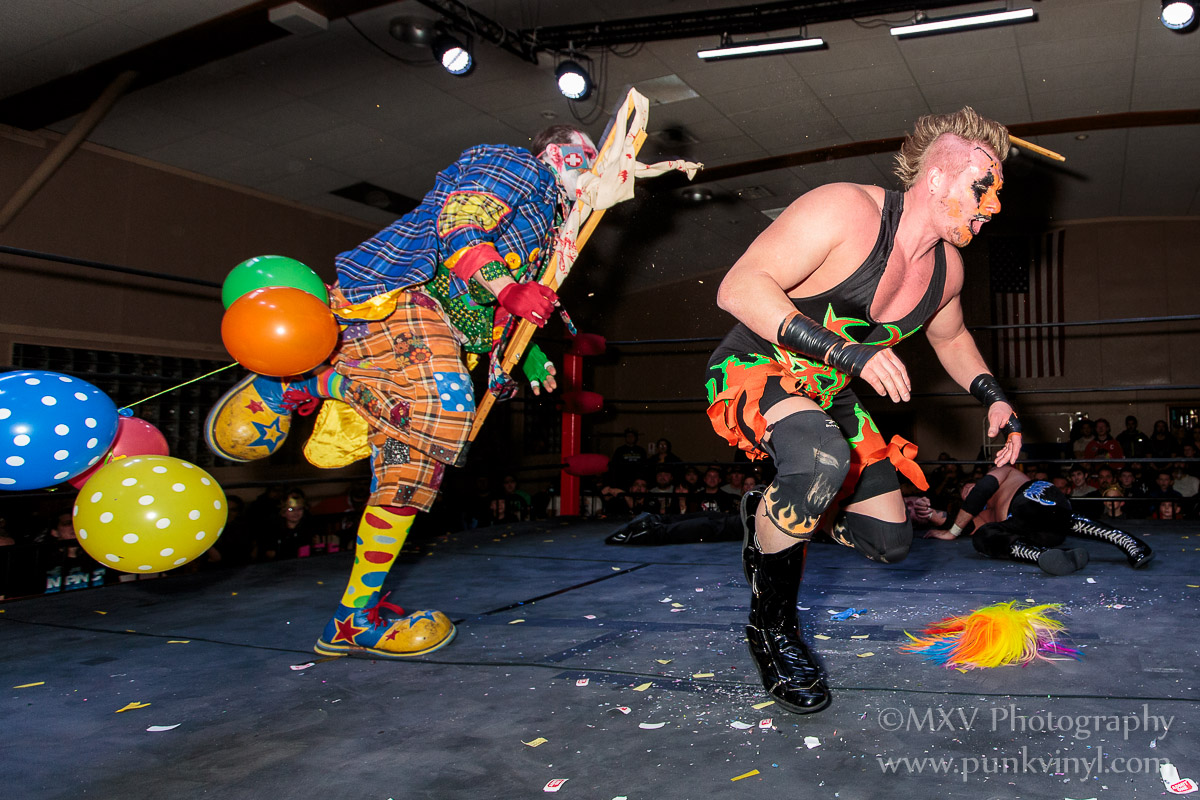 It is the end of the year and the holiday season and for the holidays, Pro Wrestling Blitz gave the fans one last show for 2013 and they gave it to them for only ten bucks! This wasn’t just some throwaway show either, this show was a tournament to crown the next King of Joliet. On top of the 7 match tournament to determine the king they had two title matches as well.

The first tournament match was between The Shogun Chris Logan and The Survivor Barry Ryte. Logan was accompanied by his manager, Billy Whack. Ryte had his work cut out for him considering he is almost half the size of Logan but he didn’t get the name Survivor for nothing and is never afraid of a fight. He gave his best and got in some good offense but it wasn’t enough and a well-timed super kick from Logan made short work of poor Barry.

Fan favorite, Hardcore Craig squared off against Jimmy Rockwell in the next bout. Craig gave Jimmy one hell of a pounding and Jimmy’s shifty tactics couldn’t save him and Craig pounded his way to victory. The fans love Craig and popped huge when he got the win.

The Ringmaster brought Machine to the ring for the next tournament bout. Clancy had the bad luck to be Machine’s opponent but Clancy is tough as nails and has a lot of heart. He came out with guns blazing and took the fight to Machine right when the bell rang. Machine just seemed to get more pissed off with every bit of offense Clancy threw at him and just kept shutting him down left and right until he nailed Clancy with a match-winning spine buster.

In the last of the qualifying matches, Zach Thompson and Pauly Thomaselli faced each other in an exciting and fast paced match. Pauly showed a side of himself that Blitz fans hadn’t really seen before as he was doing a lot more aerial maneuvers and fancy flipping moves.  This really excited the fans and it also led Pauly to win the match and advance in the tournament which was now about to start the semi finals.

The semi finals began with Hardcore Craig vs. The Shogun Chris Logan. Logan didn’t have it as easy as his first round bout as Craig is probably the toughest man on the roster. These two fought all over the ring and even outside of it and there was a lot of good back and forth action and punishing looking moves. In the end when Craig charged towards Logan, who was in the corner, it was Logan who pulled out a hail Mary super kick to the charging Craig that was enough to keep Craig down for the three count much to the chagrin of the fans.

Pauly Thomaselli and Machine returned to the ring and had an excellent semi final match that once again showcased the more aerial side of Pauly. Machine was his usual brawling and brutal self and delivered one punishing move after another but Pauly wouldn’t give up and somehow squeak out of losing and keep fighting back. Foolishly Pauly tried unsuccessfully for much of the match to try to body slam Machine and would just get beat on for his trouble. When Machine looked like he might actually lose the match, Judas came out and interfered but even that wasn’t enough to keep Pauly down and he not only successfully slammed Machine but also nailed him with a 450 splash off the top rope to get the win. The fans loved it and Pauly looked like he could go all the way and become the King of Joliet.

In the first of two title matches, Matty Starr defending his No Limits title against Buddy Roberts Jr. Matty was accompanied by his new manager, Mr. Flores. Buddy is one of the most loved wrestlers on the Blitz roster and every fan in the building was rooting for him to win the No Limits title. These two put together a really exciting match with a lot of great action, near falls and some great pacing. During the grueling battle, the referee got knocked out which gave Matty an opening to cheat as he looked like he’d be losing his title. Mr. Flores tossed him a foreign object with the intention of having Matty use it to win the match but Buddy kicked Matty which made him drop the object which Buddy retrieved and clobbered Matty with. Buddy got the pin when the referee came to and the referee handed Buddy the belt. Buddy was cheering with Melanie Cruise and Barry Ryte in the ring while Matty was crying like a kid who lost his favorite toy. The fans were going nuts cheering what they thought was a new champion but the referee found the foreign object and confronted Buddy with it asking if he used it. Buddy was honest and that honesty cost him the match and the referee disqualified Buddy and gave the title back to Matty who then stopped crying and started laughing as he left with his beloved belt.

In the final match for the King of Joliet tournament, The Shogun Chris Logan and Pauly Thomaselli faced each other to become king. This was a very good match and Pauly once again wowed the crowd with a few flashy moves but in the end it was another Logan super kick that got the win and Logan became the new King of Joliet. He stole a crown from some kid in the crowd and wore it as he went back in the ring and said he was the Shogun of Joliet and he wants his damn crown (the coronation ceremony happens at the January show).

In the main event, Ruff Crossing put his Blitz title on the line against The 3 Rings’ Grin. These two are no strangers to each other as the 3 Rings have been chasing the Blitz title for the entire year. This was one hell of a brawl that happened in and out of the ring and everywhere in between. Ruff was a man on a mission and he wanted to be rid of Grin and the 3 Rings once and for all but they have been relentless in their quest and in their dirty tactics. When Grin looked like he wasn’t going to be taking the title, Judas and the Ringmaster interfered when the referee was knocked down. Ringmaster knocked Ruff out with his cane and it looked like they were going to finally cheat their way to the title when a mysterious clown named Yabo (based on some strange video clips throughout the show) came to the ring. This demented looking clown had a bunch of balloons and walked with a crutch. He came into the ring and it appeared that he was going to be yet another member of the 3 Rings when he walked up to the Ringmaster and handed him a balloon. The balloon exploded in the Ringmaster’s face which took him out as confetti and carnival tickets sprinkled the air. Yabo then took his crutch and beat the crap out of Grin with it and knocked him out too! He then left the ring as Ruff Crossing came to and Ruff picked up Grin and nailed him with a tombstone and covered him just as the referee came to. The ref crawled over and made the three count and Ruff was victorious as well as puzzled as he saw Yabo leaving ringside and handing a balloon to a kid in the crowd on his way out which thankfully wasn’t an explosive one.

The King of Joliet was a fast paced event that delivered nine matches that kept the excitement going strong for the entire evening while leaving fans hanging and wondering who this Yabo is and what part he is going to play in the near future. It was a great way to end a year of wrestling.

Check out additional photos from The King of Joliet right here!