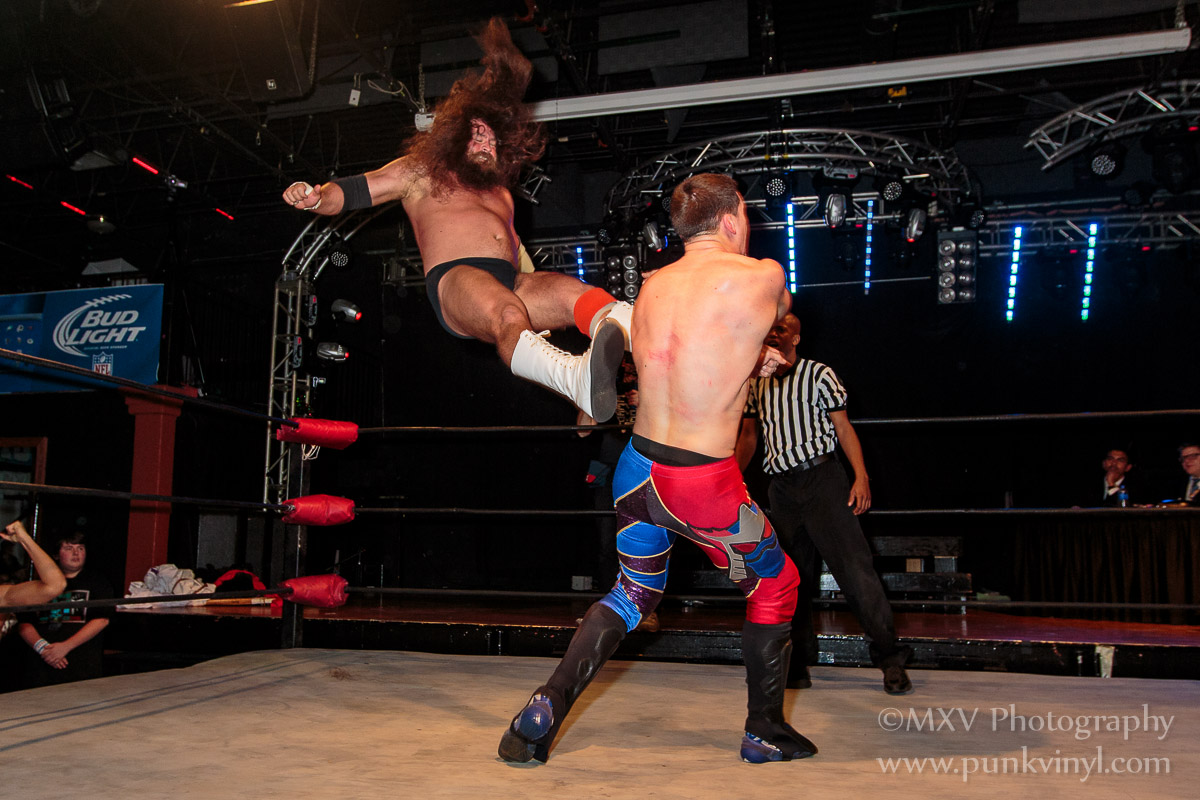 How can you go wrong if you name your wrestling event after one of the best Pantera albums? The answer is you can’t and Resistance Pro Wrestling proved that on Friday night when they put together another very fun night of wrestling. A ton of fans braved the cold and the snow to come out for a good time.

Three dark matches got the crowd warmed up and all of them succeeded in doing that to varying degrees. Diablo Jones defeated RPro head of security Mike Bradley in the first bout, Wayne Van Dyke defeated Eddie Graves in the second, and Chris Hall (now free from Jesse Corgan’s Special Forces) defeated Remi Wilkins in a particularly good brawl.

A fatal four-way match started the main show. This featured Jake O’Neill, his reluctant man-servant Scotty Young (who looked pretty miserable having to cater to Jake’s wishes), Da Cobra, and Marshe Rockett. This match was fast-paced and a lot of fun. The action was all over the place and there were a few exciting high spots. Near the end of the match Scotty had a sharpshooter on Da Cobra and was poised to win the match with it when Jake demanded he release the hold so he could get the win instead which not only infuriated the crowd but also Scotty who was furious.

Two of Rpro’s finest female wrestlers were up next as Crazy Mary Dobson squared off against the ultra violent and obsessed Mickie Knuckles. Mickie is obsessed with winning the women’s title from D’Arcy Dixon and is out to destroy anyone unfortunate enough to be in her path. Crazy Mary was the unfortunate one this evening and the moment the bell rang Mickey attacked her outside the ring and busted her wide open! Mary wasn’t going to let a little blood slow her down though as she fought through it and gave everything she had. The fight went back and forth and these two put on one of the more punishing women’s matches in recent history. The match ended when Mickie hit Mary with this sick looking powerbomb from the top rope that damn near broke Mary in half.

Wrestling legend Tracy Smothers came to the ring and started talking to the crowd. He was accompanied by his daughter, Jessie Belle Smothers (who was quite the attractive lady). Tracy didn’t get to say much before he was rudely interrupted by Colonel Jesse Corgan who took the opportunity to introduce his newest protegé, Dany Only, by having him attack Tracy. Jesse goes through clients faster than Spinal Tap went through drummers so who knows how long Dany will last, however, as he lost the impromptu match with Smothers and there’s nothing Jessie hates more than losing and things not going his way. During the match the crowd was also introduced to two more new clients of Jessie’s, aptly named Jessie’s Girls, as they attacked Jessie Belle as she was outside the ring cheering on her dad.

Next up was a “golden ticket match”. In a triple threat tag match, Team I.O.U., Two Star Heroes, and The Painkillers (with manager Eryn) competed to win a golden ticket which would give them a title shot any time they chose to cash it in (think WWE’s money in the bank gimmick). This match featured so much fast action that it was exhausting trying to keep up. Bodies flew in every direction and there was a lot of twists and turns, and interference. When the dust settled and the bodies stopped moving it was The Painkillers who won the match and took their golden ticket and hopes of a future title win to the back.

Lock Up got their rematch against Da Soul Touchaz in hopes of reclaiming the tag titles they lost at the previous show. Two months in the hole seemed to take its toll on Lock Up as they seemed different. They were darker and more violent. The two went to town on Willy and tried to not only tear his arm off but break off his fingers too. The normally comical Suge D was a very focused, angry, and violent combatant and it almost seemed like he would be just as happy killing his opponents as taking their titles. This was an excellent match that told a good story and despite the beating Lock Up gave them, Da Soul Touchaz emerged victorious and retained their titles. This is likely not the last we’ll hear from Lock Up when it comes to the tag title scene and this feud between these teams still has legs. As soon as the match ended, The Painkillers (and Eryn) came out from the back and cashed in their golden ticket. They figured that the champs were so beat up that there was no way they’d stand a chance defending the belts again. They were wrong and the match lasted about two minutes and ended when Willie nailed one of them with a pounce and got the win.

D’Arcy Dixon put her title on the line against Thunderkitty. Thunderkitty is adored by RPro fans and D’Arcy has really earned their respect in recent months so the crowd was a little torn about who to root for (and mostly just rooted for both). Thunderkitty did everything she could to lock on her patented sleeper hold to win that title but D’Arcy fought her every step of the way and would not give up even as she was being worn down. Kitty had that sleeper locked on good and thought victory was only a couple of minutes away but D’Arcy had one last hail Mary up her sleeve as she walked up the turnbuckles and kicked herself off them which landed her on top of Thunderkitty long enough for the referee to count to three.

In hardcore action, Raven, Tommy Dreamer, and Madman Pondo took on Ashton Vuitton, Eric St. Vaughn, and Brady Pierce. Ashton wanted revenge on Raven for throwing a fireball in his face at the last show, Brady and Pondo wanted to kill each other because they have been fighting each other for months while they were a tag team that was losing matches constantly and Eric wanted to avoid having to fight anyone and tried to stay out of it as much as possible. Being that this was a hardcore match there was no rules and no sense of order and the fighting broke out inside and outside the ring simultaneously. Weapons included a stop sign, a kendo stick, Pondo’s saw on a bat and the chairs in the audience. It was hard to follow all the action with that many combatants beating the crap out of each other all over the venue. When the action (at least a percentage of it) came back inside the ring it looked like the Tommy Dreamer was about to lead his team to victory when Raven kicked him in the gut and DDT’d him and left him laying to be pinned by Ashton’s team. When the match was over Raven took the mic and told Tommy that he couldn’t resist kicking his ass yet again, just like he’s been doing for the last 19 years and that he will spend the rest of their lives doing it over and over.

In the main event, another rematch took place as The Ego Robert Anthony and  Jocephus did battle once again. This time out, Jocephus was the champ and Ego the challenger. Ego was clearly very frazzled and frustrated that he lost his prized possession and wanted it back more than anything. He attacked Jocephus before the bell even rang and gave him a good beating before the match even started but Jocephus is a huge, strong monster and wasn’t staying down for long. Jocephus gave every bit of violence back to Ego that he was receiving and then some. Ego threw everything but the kitchen sink at Jocephus and probably would have included the sink if it wouldn’t have gotten him disqualified but nothing he did could keep Jocephus down. He tried and tried but nothing was enough to get him the win and in the end Ego had nothing left and Jocephus retained the belt. This made Ego even more frustrated and he started throwing stuff around and even attacked commentator, Zach Thompson, as he made his way to the back. Don’t be surprised to see an even more unstable Ego at next month’s show based on the outcome of this match. The match itself was an excellent brawl between the top two guys in the company that was very deserving of its main event status.

Vulgar Display of Power was a really fun wrestling show with a strong lineup of great talent who once again busted their asses to entertain the fans. The caliber of talent in this company continues to improve and this is a wrestling company worthy of someday becoming a household name.