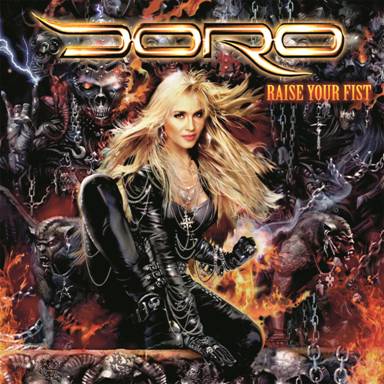 Women in metal are in a precarious position. They’re either noted more for their look than their actual output (like Lita Ford), or as a novelty act despite serious talent and dedication to their genre (Jill Janus from Huntress, some others) – either way they’re always clinging on the fringe of a male dominated field. Doro Pesch has been plugging away at this “metal thing” for over 30 years and, in the U.S., is still relatively underappreciated. Europe and other parts of the world have revered her since the early 80’s when her band Warlock hit success with “All We Are” – the true distaff metal anthem of all time. Despite fans on this side of the pond eschewing her and her male contemporaries in favor of the trends that followed, she never stopped doing her thing and has polished it to perfection as evidenced on Raise Your Fist.
Even though 1991 was 23 years (!) ago, it’s alive and well on Raise Your Fist. From the cover art to the tracks contained on this aural time warp, you’ll be hard pressed not to think this album was made that year and just remained unreleased until now. While bands like Steel Panther or The Darkness do their retro-metal act with a wink and a nod, DORO does hers without the slightest bit of irony. She’s not saying “Hey, remember when this was cool?” (wink-wink, nudge-nudge), she’s indulging a shared passion between herself and her loyal fans.  There’s not a “Spinal Tap” moment to be found here. This is great Euro Metal, plain and simple. If you weren’t a fan then, this isn’t going to sway your opinion. But if you grew up with Judas Priest, Maiden, Saxon, and their ilk this album will put a smile on your face and warm your heart. It might remind you of younger, happier days when all you cared about was the music and growing your hair. Images of smoke machines, neon lazers, and a little German woman dressed head to toe in black leather will fill your thoughts. Rock stars that looked like rock stars, not baristas.
All of the tracks rock, but like AC/DC, are pretty interchangeable. Stand outs are her duet with Lemmy on “It Still Hurts” (he actually sings!) that may well trump “Close My Eyes Forever” as “Best Metal Ballad of All Time (duet)”, the German language “Engel” and “Freiheit”, and the gallop-heavy “Revenge”. The album closes with “Hero”, a tribute to her friend and inspiration Ronnie James Dio. It’s ironic that she chose to do that because, after listening to the flexibility of her voice on this album, she ranks right up there with RJD, Rob Halford, Klaus Meine, and Bruce Dickinson as metal’s premier vocalists. Even if you don’t walk away as a fan of her music, there’s no denying the majesty of her voice. What she does at nearly 50 years old shames any singer on “American Idol” or “The Voice” – no AutoTune needed.
It’s hard to be critical to an album like this because I smiled the entire way through it. It made me think of times long past, friends who are no longer around, and the perpetual metal head that still lives inside of me. It’s comforting to know that, while others have moved on and “grown up”, Doro sticks to her guns and stands for her people and the genre that she helped transform. The “First Lady of Metal” deserves appreciation and reverence, so “bang thy head” and smile while giving this worthwhile effort a listen.