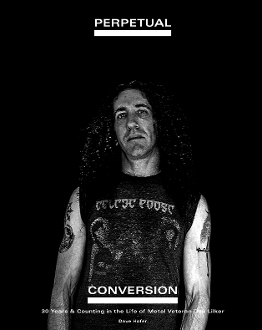 A very entertaining and informative history of one of metal’s unsung heroes. A must-read for anyone who likes metal and extreme music!
Rating:

Back in the mid ’80s when I was in high school, I started expanding my musical diet from strictly punk and hardcore to include thrash metal. I discovered it either through some friends, some hardcore bands who were crossing over, or on the short-lived metal station, Z-Rock. Metallica, Slayer, and Anthrax were some of the first bands I was exposed to and I loved them. Soon after that, a friend from school gave me a demo tape from a band called Nuclear Assault that I’d become a fan of too and hold them in the same high regard as the aforementioned bands. As it turned out, the bass player from Nuclear Assault, Dan Lilker, was in Anthrax for a short time and played on their first album before being unceremoniously dumped from the band he helped create! Not only that, but Dan was in S.O.D., who had put out this thrash metal album that all my friends seemed to love but for some reason or another I never really liked. None of that mattered to me much though because Nuclear Assault was awesome. They had lots of power, played pretty fast but still had good melody and it was songs like “Betrayal” and “Justice” where their singer could showcase a melodic side to his voice where the band really shined to me and those songs went on every mix tape I made for driving in the car for years.  Shortly before Nuclear Assault broke up, Dan Lilker went on to form Brutal Truth, who became hugely influential in the grindcore scene much in the way his previous three bands were in the thrash metal scene. The guy seemed to be ahead of the curve in everything he touched and ended up being in bands that influenced future generations of bands and fans throughout the world.

While he may not receive the mainstream accolades that members of Slayer, Metallica, and his former band mates in Anthrax have over the years, Dan Lilker has probably done more for music in a larger variety of ways than all of those people put together. Thrash metal, grindcore, black metal, industrial metal, and everything in between are styles of music Dan has written and produced over the years and the guy is still super prolific three decades in, is always evolving, and has enjoyed a nice life getting to do what he loves, even if he never achieved the super stardom status of some of his peers. The man deserved to have his story told so a larger part of the world could recognize him and his time has finally come in the form of Perpetual Conversion. The book was a labor of love that author, Dave Hofer, spent a few years working on in the form of doing research, conducting countless hours of interviews, collecting photos, flyers, and other ephemera, and then transcribing it all and putting the pieces together to form a story and he did an amazing job.

The book tells Lilker’s story chronologically in mostly his own words. It gives a brief glimpse into his childhood and how he got turned onto listening and playing music and then quickly gets to the good stuff where he befriended people who he formed the band, Anthrax, with. Dan comes off as honest and personable in this book and he also is never a shit-talker. He didn’t have much bad to say about anyone, including former band mates who kicked him out of his own band and he also wasn’t afraid to own up to any mistakes he made over the years. He has an amazing attitude and never came across as bitter even when talking about opportunities he missed out on due to leaving bands or not doing something differently. It is clear that making and performing music is the thing he loves most in this world and that he is perfectly happy with the life he’s led thus far and he sure had some amazing stories to share in this book.

From Anthrax, to S.O.D. to Nuclear Assault, to Brutal Truth, back to Nuclear Assault, and then some of the many bands he played in after, along with a healthy dose of production and guest appearances on other bands’ records, the man has experienced everything and was able to tour the world numerous times. The book is mostly a narrative in Dan’s own words transcribed from the interviews Hofer did with him over the years and it is filled out with interviews with various friends, band mates, label heads, peers, and fans and the interviews are placed right during the story they were a part of being told. It was really cool to be reading Dan’s stories and then suddenly have whoever it was he was talking about chime in with their side of the story.  Throughout all the various interviews in this book, the common denominator is that Dan is universally loved and universally praised for his contributions and influence on various styles of metal music. The book also contains tons of great photos of Dan over the years, many from his own personal archive, along with scans of various record covers, demo tapes, flyers, and other related items to the bands he has played in that were as fun to look at as this book was to read. The book is filled with a ton of great history and I learned a lot from it, especially with what he did after Nuclear Assault as I didn’t keep up with him since I wasn’t a grindcore fan. I was glad to read on about other stuff I missed out on he did after Brutal Truth that I now am intrigued to check out sometime, and he’s still at it!

The book is 175 pages long and the pages are large. It was a really fun and informative read from start to finish and you really feel like you got to know Dan Lilker after reading this since it was mostly in his own words. I respected him for the stuff of his I was a fan of growing up and I have an even greater respect for him after reading this book and catching up with what he was up to after I lost track years ago. He comes off as a good guy who has made some great music over the years and he seemed to be very happy and appreciative for the life he’s been living the past three decades and really shows no sign of slowing down. If you are a fan of anything Dan Lilker was ever involved in or just a fan of metal and extreme music in general then this book is a must-read. Dan Lilker should be a household name among metal fans and Dave Hofer should be commended for his efforts to bring Dan’s story to the masses.