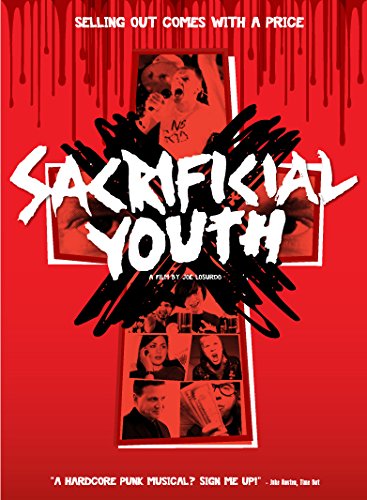 A punk rock musical that is a really fun ride from start to finish.
Rating:

Joe Losurdo hit a home run quite a few years ago when he made the Chicago punk documentary movie, You Weren’t There. It seemed inevitable that he would return to film making in some capacity and he’s done so with his first original movie, Sacrificial Youth.  Joe was born and raised punk rock so making a punk rock themed movie makes sense.  The movie is billed as a hardcore punk musical and to the best of my knowledge it is the first of its kind. We’ve had a few punk themed films over the years like The Decline of Western Civilization and Suburbia and in more recent times, that steamy pile of shit called SLC Punk but none of them were musicals. This unique twist on a punk rock themed movie resulted in a movie that is a lot of fun that comes off as a cross between Suburbia, Repo Man, and Tommy.

The movie tells the story of TJ and his band, Sacrificial Youth. They are a hardcore band and TJ is their front man and a figurehead in the local punk scene.  TJ is straightedge and perpetuates everything that encompassed punk rock in the 1980’s. He did everything for “the scene”, he was against everything corporate and chastised anything or anyone he deemed to be “sell outs”. His band played regular DIY shows at the local youth center. His dad was an old punk rocker who is now frustrated and struggling with the responsibilities of adulthood while trying to explain to his son how it was in the old days and how now he needs to think about his future. TJ’s mom is more down to earth and is supportive of TJ’s endeavors while still impressing upon him that he needs to think about his future more.

Things go awry for TJ when his bass player books their band in an opening slot for this corporate rock band, Hellbound Boy. They are sponsored by a multinational corporation who produce an energy drink called Bluud. The corporation has plans on destroying the scene and this is when things get a little biblical as the head of the corporation (played by Larry Gutkin of  The Mentally Ill) seems to actually be the devil himself. His right hand man project manager (played by Mike O’Connell of Rights of the Accused) does the dirty work of trying to corrupt the youth and get them to sell out and gets Sacrificial Youth’s bass player to buy into it. This leads TJ to realize he is the chosen one and has to singlehandedly save the scene (with a little help from his love interest, Maggie).

As the story progresses, scenes often break out into songs which further serve as the narrative, and they are punk and hardcore songs for the most part. I thought the number where TJ’s parents were fighting and how it progressively gets faster as the argument heats up was especially clever and Maggie’s song where she realizes she loves TJ was can’t-get-it-out-of-your-head catchy. Some of it was campy and funny and having grown up a teenage punk rocker it was really amusing to see TJ echoing many of the feelings I had when I was his age even though that was a generation ago and so much has changed, yet so much still rings true as well.

The movie was good fun from beginning to end. I laughed often, I was impressed with the musical numbers and I thought it was really neat to see a modern-day punk film. In my teenage years the aforementioned punk-laced movies were played regularly by my friends and me and now all these years later we have a new punk rock movie that hopefully gets the same treatment by punks both young and old.

The movie runs about 80 minutes and was shot in HD, 16×9 with stereo sound. It is packaged inside a digipak DVD case and has a booklet with the lyrics to the musical numbers that looks like an old fanzine which was a really nice touch. There is also a download code to get MP3’s of the soundtrack. Extras include outtakes and a commentary track by director Joe Losurdo and some of the actors in the film.

For his first non-documentary film, Joe Losurdo really hit one out of the park with this fun punk musical that tips its hat to the punk rock of yesteryear and this is really an enjoyable movie that anyone who even remotely had a connection to punk rock would fully enjoy. It was clever and a great way to spend some time. Hopefully Joe continues to make films (I do know he has another documentary in the works that should be fantastic) as thus far he has a perfect batting average. Do yourself a favor and check this out when you get a chance, you’ll be glad you did.