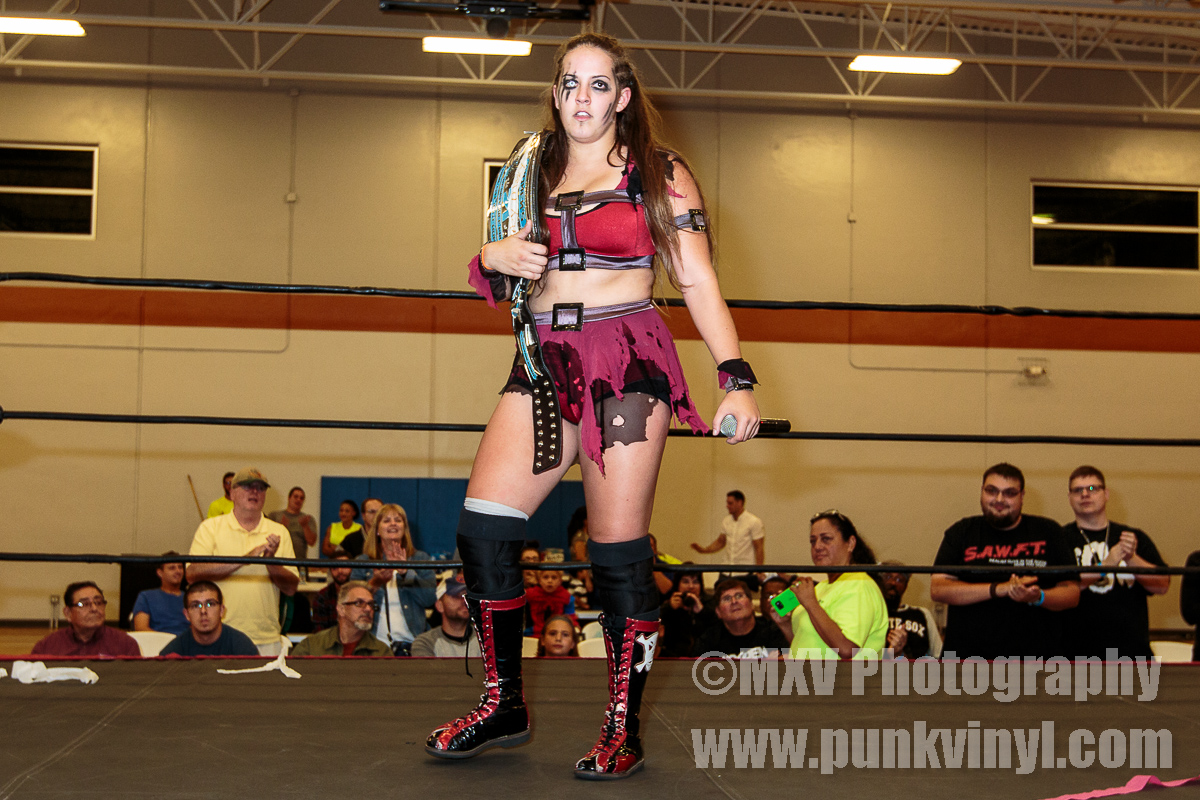 With the pending changing of the seasons came some changes in Resistance Pro Wrestling. They just crowned a new heavyweight champion at the last show and their long-running women’s champion made her final appearance for the company on Saturday at Exile. It was an action packed show full of more changes, familiar faces, fan favorites and newcomers.

A dark match between Paloma Starr and Amazing Maria got the crowd warmed up before the show. The two ladies spent five minutes tossing each other around the ring and Paloma came out the winner of the bout.

Hardcore Heather Owens came to the ring at the start of the show announcing that Mickie Knuckles wouldn’t be competing for the women’s title that evening due to her being out with an injury and Heather declared it was her time and that she would be taking her place. Angel Dust came to the ring and interrupted her arguing that she’s been in RPro longer and that she should get the shot instead. The two ladies almost came to blows when owner, Jacques Baron, came to the ring and said that they can both have their wish and that he was making the women’s title match a triple threat elimination match. Both ladies seemed rather pleased with this.

Cody Jones and Tommy Else had a rematch after Cody cheated to win their match at the last show. During the match BD Smooth came to ringside wearing a Tommy Else shirt and started cheering Tommy on like he was his manager. Tommy had no idea why Smooth was there as he certainly didn’t invite him. Despite the distraction Tommy was gaining the upper hand until Cody blatantly kicked him in the balls so hard they went “somewhere else” and the referee called for the bell and disqualified Jones. Jones then attacked Tommy after the bell rang and instead of helping, Smooth just sat there and watched it all happen while cheering Tommy on. Tommy may have a stalker on his hands and he still wants to settle the score with Jones.

Yabo The Clown faced Mojo McQueen in the second match. These guys had one hell of a good match and it seemed that no matter what Yabo threw at Mojo, the voodoo king was able to keep attacking him to the point that he knocked Yabo out with his finisher and won the match. After the match, Mojo pulled out a body bag, hit Yabo with a tombstone pile driver and stuffed him in the bag and carried him away. No one knows what happened to Yabo after that and hopefully he wasn’t used in some sort of sacrifice! Great match by both guys and it will be very interesting to see what happens next with these two.

Ring of Honor’s, Ray Rowe, made his RPro debut when he and The Iron Demon Shane Mercer tore up the ring in an incredible match. These two behemoths beat the living hell out of each other in an amazing battle. Lots of great back and forth and the two kept topping each other. The match came to an exciting end when Shane Mercer was able to get Rowe in his finisher and get the pin. Easily the match of the night.

Willie Richardson and Suge D faced each other in a #1 contender’s match. Before the match started, Willie announced that he has a surprise for everyone which was the return of C-Red! The crowd went nuts for his surprise return. Suge, Willie, and Red all shook hands and then Willie and Suge went on to have an amazing, emotional match. This match was two guys, one with a large size advantage, giving everything they had to win a match for a shot at the gold. These two guys were battered, bruised, and worn out by the time it was done and in the end, Suge was able to chip away at the big man enough to soften him up enough to lock on the snake charmer and get the win. After the match, Suge helped Willie back to his feet and the two hugged and shook hands and Suge cut a promo putting over Willie and Red, and then saying that next show, no matter who is the champion, he’ll be taking that title from them. This match hit a home run with storytelling and emotion and was some of the best work for the company from both men.

After the intermission John Skyler and Corey Hollis defended the tag team titles against Daniel Eads and Shigehiro Irie. This was a really fun and entertaining tag match full of fast paced action. Excellent work by everyone in this match in a close battle that saw the tag champions emerge victorious once again. After the match, Skyler and Hollis cut a promo saying that at the next show they will put their titles on the line one last time against Main Street Youth, this time in a Texas Tornado Street Fight!

Sean Mulligan put his newly acquired heavyweight title on the line against Cobra. Mulligan had the advantage for much of the match and even was overcoming Justin King’s attempts at interference but when Mulligan went to hit a superplex, King pulled his legs out from under him and held them down so he couldn’t kick out when Cobra landed on him and pinned him. Cobra and King literally robbed Mulligan of his title and Cobra became the first ever two-time RPro champion. This likely made Suge D happy because he has a score he’s wanted to settle with Cobra for a year now as Cobra stole the title from Suge when he won it the first time!

In her final appearance for Resistance Pro, Crazy Mary Dobson defended the women’s title that she’s held for close to two years in a triple threat elimination match against Hardcore Heather Owens and Angel Dust. Mary overcame the odds one final time as first Heather Owens was eliminated and then after some more exciting wrestling, Angel Dust was. Great work by all three ladies and the fans had to be surprised that Mary went out the winner as it was known that this was going to be her final appearance for the company. Mary gave a very touching speech after the match and she then vacated the title for it to be defended next show at the Sam Thompson memorial show which is the same show she made her RPro début at. The entire locker room and production staff came to ringside to give her a standing ovation before she exited the ring and exited the company. Crazy Mary is off to the big stage and it is well deserved. She will be greatly missed but everyone in the company and all of the RPro fans are very excited for her opportunity.

Exile was an emotional roller coaster that was one hell of a fun ride from start to finish. The company celebrates their five-year anniversary next show where they will crown a new women’s champion among other things. It’s a great time to be a wrestling fan in Chicago and it will be a long two months waiting for the next RPro event.