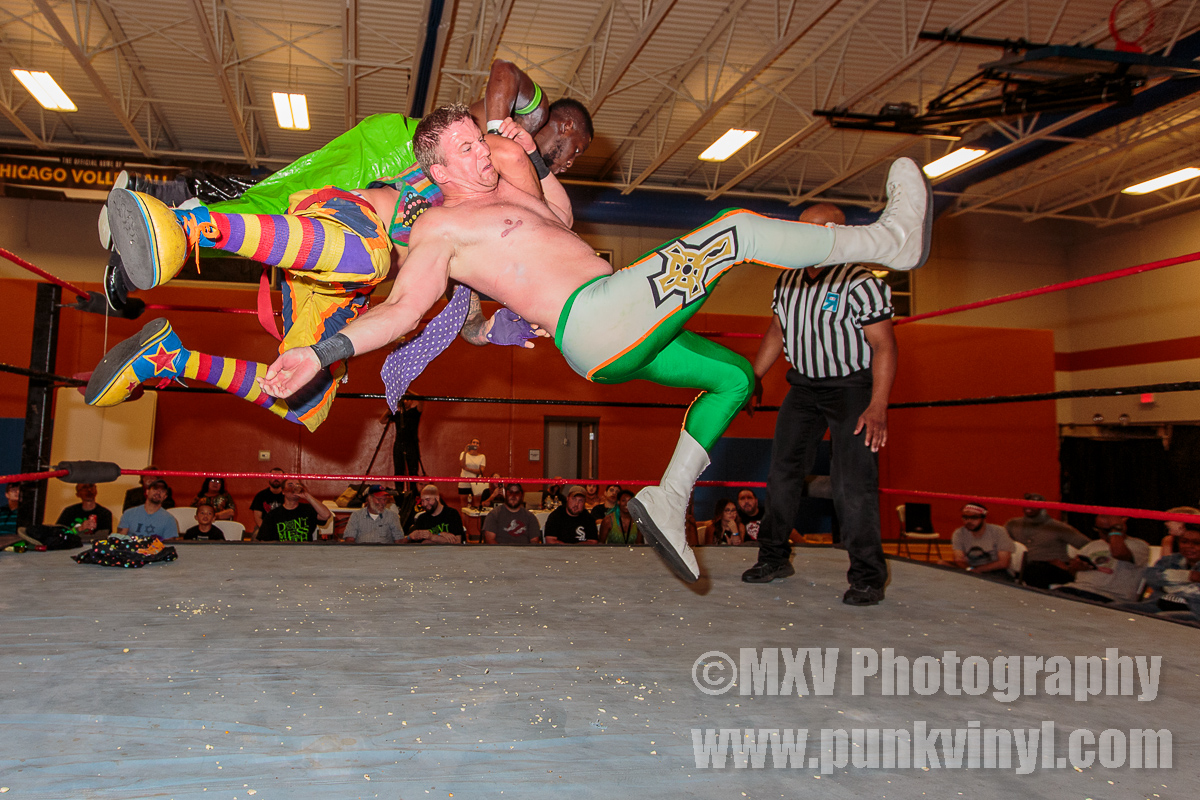 The best day to be a wrestling fan in the Chicago area comes every other month when Resistance Pro Wrestling hosts an event and last Saturday they held their latest offering, Sabotage. The show featured three title matches and some big surprises!

They had a pre-show match to get the crowd warmed up that featured Austin Bradley vs. Daniel Eads. Bradley was a gruff looking brawler and Eads looked like Superman. The two had a nice, short match and Eads really stood out with a unique looking drop kick that had him landing back on his feet and a really impressing looking springboard elbow drop.  After about five minutes of good action, Eads got the win.

Fan favorite, Tommy Else, faced Cody Jones in the first match of the main show. Tommy got an early advantage with some power moves that showcased his strength but the devious Jones used some rather unscrupulous tactics to turn the tables on Else, going so far as to kicking him in the nuts when the referee had his back turned and getting a pinfall. Else was furious (and nursing his family jewels) after the match and it’s likely this cheap loss isn’t going to sit will with him.

Next up was D’Angelo Steele against the returning, Iron Demon Shane Mercer. Shane is an absolute monster of a man with ridiculous strength and at times he tossed Steele around like a rag doll. Steele was pretty crafty however and got in a lot of offense of his own before succumbing to Shane’s spectacular finisher, Moonsault and Battery, that has to be seen to be believed. The fans went nuts for it and were ecstatic to have him back. Shane’s been racking up wins lately and don’t be surprised if a title shot is in his future.

Hardcore veteran, Mad Man Pondo had a match with Jacob that was contested under “Pondo’s rules”. Pondo’s rule this time was that falls count anywhere and halfway through the match he and Jacob brawled out into the crowd, and then outside through the park district grounds surrounding the rec center! Most of the audience followed them outside too (lucky for them they didn’t have to pay admission a second time to come back in the building) in order to watch the two combatants beat the crap out of each other. After five or more minutes of outside battle they made their way back to the ring to finish the match in the center of it, where Pondo got the win after leveling Jacob with his trusty stop sign.

New tag-team champions, John Skyler and Corey Hollis, defending their titles against the former champions, Main Street Youth. Skyler and Hollis have been regular staples of various WWE shows lately and the crowd loves them. Main Street Youth are a great team as well and these two teams have great chemistry working together. This match was non-stop excitement and embodied everything great about tag team wrestling, This kind of match is what WWE has been lacking for the better part of two decades and if they had talent like these two teams up there given a chance to really shine, then the tag title scene would return to the importance it had back in the 1980’s. Stellar work by both teams in this one and the champion retained the titles, but suffered a post-match beat down by Main Street Youth so this feud is far from over and it is the fans that are the true winners here.

After the intermission, Colt Cabana and Special Dark Suge D had a rematch that both the fans and the wrestlers themselves have been waiting over a year for. These two made a more traditional mat style bout really fun and entertaining and the match really stood out from not only all the others on the card in terms of the style it was presented, but also from most shows both on the indie and big league level. It was a great match that really showcased the mat skills of both men that was peppered with some clever comedy bits too. It was definitely worth the wait and Suge D even made Colt tap to his Snake Charmer submission hold. After the match, Sarah Shockey came into the ring to inform Suge that at the next show he will be facing Willie Richardson in a #1 contender’s match, which means Suge’s quest for a title shot is within his grasp, but he has his biggest opponent yet ahead of him before that can happen.

Paloma Starr came to the ring and called out Mickie Knuckles for a live edition of “Chica On The Beat”. The sassy Paloma really gave it to Mickie for losing her last match with Crazy Mary Dobson and said that she should be facing Mary instead of Mickie. This infuriated Mickie. Paloma said that she and Mickie should have a match to decide who gets to fight Mary next. Mary came to the ring and said she had no problem waiting and did some guest commentary while she watched the action take place. Paloma really brought the fight to Mickie but the more powerful and experience Knuckles eventually finished her off, but not before expending a lot of energy in the process which she could have used in her match with Crazy Mary, which started immediately after.

Crazy Mary Dobson and Mickie Knuckles  turned up the volume from their previous outing and kicked the ever-loving crap out of each other for a good 15 minutes until Mickie inadvertently hit the referee in the stomach (or was it on purpose?) which downed him for a bit. While the referee was down writhing in pain, Mickie found a ladder under the ring and had every intention of using it to beat Mary to a pulp but Mary reversed Mickie’s attempt to toss her into it and instead drop kicked Mickie into the ladder and rolled her up for a pin. Mickie was furious and Mary celebrated yet another title defense. Wonderful work from all three ladies involved in this pair of matches.

In the main event, and the first main event in over a year to feature the heavyweight title, Cobra put his title on the line against both Yabo The Clown and Sean Mulligan in a three-way elimination match. The stipulation was that the first person to be eliminated wouldn’t get another title shot for one year which meant that if Cobra was the first to go, he wouldn’t get to invoke the rematch clause in a champion’s contract for a year! These three guys put on a clinic of everything to do right in a three-way match. Non-stop action and excitement, lots of near falls, and some really big spots that had the crowd on their feet. After close to 15 minutes of brawling and while all three men were reeling after a big triple superplex, Mojo McQueen came to ringside from out of nowhere holding a chest. Green smoke was emitting from the chest as he opened it and produced a voodoo doll that looked like Yabo! He then pulled out a metal stake and started stabbing it and as he did, Yabo was wincing in pain in the same spot that was being stabbed on the doll. Cobra used this to his advantage and hit the pained clown with his finisher and pinned him, thus eliminating him from the match. Mojo quietly exited the arena after this and Mulligan and Cobra continued the match.

Another five or more minutes went by with more near-falls than you could keep up with and both men gave it everything they had and somehow found the strength to keep kicking out of bigger and bigger moves. Cobra looked like he was going to come out on top but a smart reversal led Mulligan with an opening to hit his finisher off of the top rope (normally it is performed inside the ring and not on the ropes). Not only did this look like it actually killed Cobra but it was enough to keep him down for a three count. Cobra did kick out about a half second too late and Sean Mulligan became the new Resistance Pro heavyweight champion to the delight of his hometown crowd. It was a great finish to a rock-solid show and it left the fans going home happy.