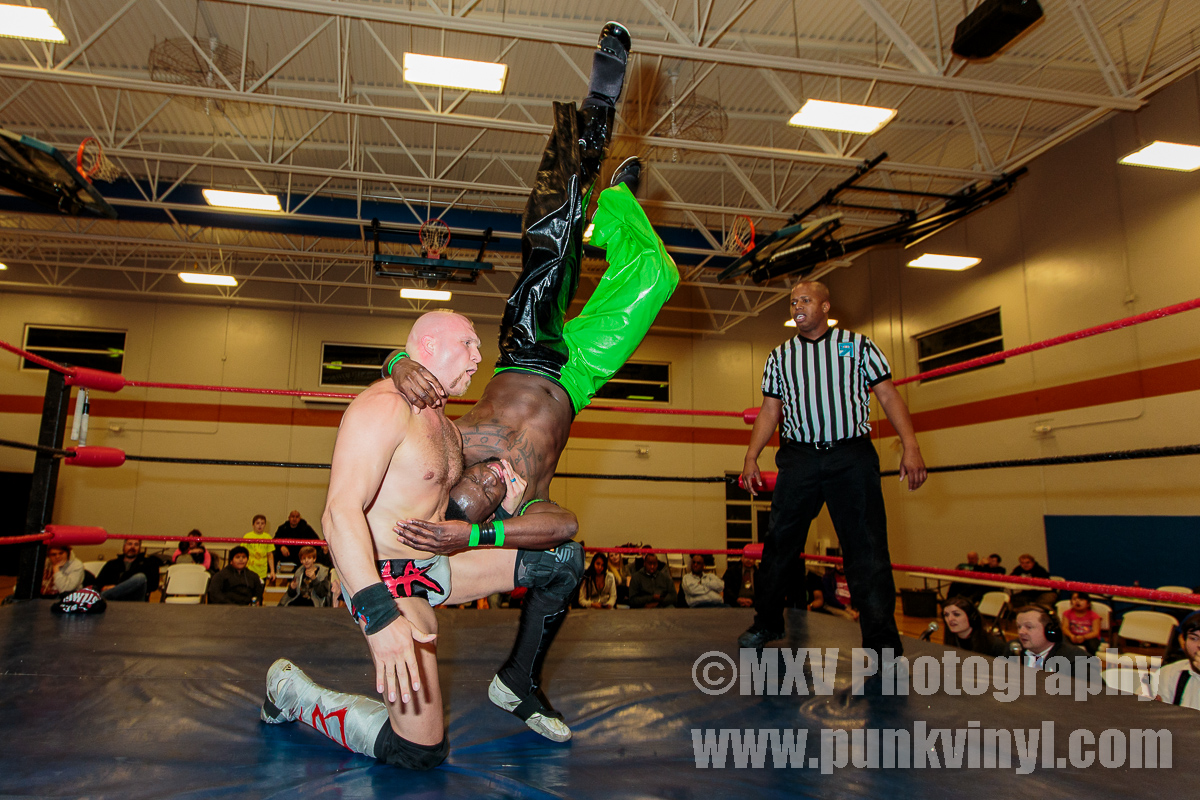 First up was Paloma Starr vs. Amazing Maria. Paloma was feisty and ready for battle and Maria was full of attitude and made sure to let Paloma and the crowd know how little she thought of them. When Paloma was firing up for a comeback, some mysterious woman came right up to the ring and started taking selfies which distracted Paloma enough for Maria to get a pin on her. After the ref counted Paloma confronted the woman and the two exchanged words before the woman left the arena.

Daniel Eads took on Cody Jones in the next bout. Jones gets more vicious with each match he wrestles and he gave Eads a real run for his money before Eads hit his finisher and got the victory. After the match, a disgruntled Jones attacked Eads and put the boots to him. It’s safe to say that this won’t be the last we see from these two.

“The Survivor” Barry Ryte tried his had at surviving Tommy Else in the third match. BD Smooth was out at ringside cheering on his favorite wrestler during the match which puzzled Tommy wondering why he keeps showing up during his matches. Tommy was hitting power moves on Barry while Barry kept running away and sneaking in attacks in devious ways which gave him control of the match for quite some time. Tommy was making a comeback when BD Smooth inadvertently got in the way which allowed Barry to roll up Tommy for a pin. Barry was proud of himself for surviving another match while Tommy was furious with BD Smooth.

When we last saw Yabo the Clown and Mojo McQueen, Mojo beat Yabo unconscious and carried him off in a body bag. That was months ago. A video sent to RPro a week before the show gave some insight as to what happened after which came with a note written in crayon stating “we’ll be at Dynasty”. In the next match, Yabo came out in a straight jacket and was being led by Mojo. The two worked as a tag team and beat the living hell out of Storm Grayson and Insomnia. Mojo called all the shots and Yabo willingly obeyed him throughout the match. After the match, Mojo grabbed a mic while Yabo grabbed announcer, Zach Thompson’s, tie and said “Main Street Youth” indicating that they have their eyes on the tag titles.

At Road to Ruin, Willie Richardson turned on both Suge D and C-Red and cost Suge his chance to regain the RPro title. Willie is now part of the Cobra Dynasty and Suge D had a chance to get even with him in a match. Suge was a man possessed and came out with all guns blazing but Willie was able to turn the tables on him and give him a prolonged beating. Suge never quits and he wouldn’t stay down and kept clawing and fighting back. This didn’t sit well with Justin King, or with RPro champion, Cobra, who came from the back and interfered in the match, causing a DQ on Willie. The entire Cobra Dynasty started putting the boots to Suge and Willie pulled out a blackjack and planned on using it on Suge but Sean Mulligan came to the ring and made the save. He was able to chase the heels off and then came to the aid of Suge. The two shook hands and an alliance was formed.

In the match of the night, Cobra defended his RPro heavyweight title against “The Baddest Man Alive” Aaron Williams. These guys fought back and forth in a very even match for around 15 minutes and brought the best out of each other as they kicked, traded holds, did some high-flying, some big moves, and some clever reversals as they fought for the ultimate prize. A slight distraction by Justin King was just enough to get Cobra an opening to get the pin on Williams but in his RPpro début, Williams proved that he is absolutely a championship quality wrestler and would be a top contender in any place he works.

In a match that happened both in the ring, outside the ring, and even in the audience, Rachael Ellering successfully defended the RPro women’s title against Kiera Hogan. This match was fast paced and at one point the action even spilled onto the laps of the people in the front row! This match was a perfect example of just how great the female talent is in today’s wrestling business and the fans ate it up like candy. It was a great way to end a fun night of professional wrestling.

Dynasty was a fine start to a new year of Resistance Pro and set up at least one match so far for their next show in March which will be Sean Mulligan/Suge D. vs. The Cobra Dynasty!