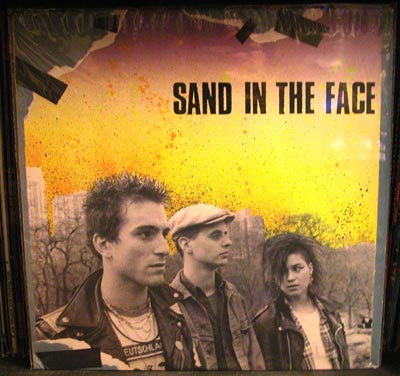 Selections from The Punk Vault [Sand in the Face]

Since the Klowns are on tour, thus making it be even longer before Destroy Your Radio is back up and running (along with the Live From Combustion Manor radio show), I figured it was time to share some selections from the vault with you my faithful readers. Hopefully this will expose you all (all 3 of you or so) to some fine punk rock music you may not have heard before and might want to seek out for yourself. That or you at least will get a peek into random records in The Punk Vault and can make your own list of “stuff I want to record on a visit to Combustion Manor someday”. I’ll probably do this once a week or so, whenever I feel inspired. So for the first selection we have a record that is a long time favorite of mine, yet largely ignored…

Sand in the Face – Self Titled LP (1986 Twisted Records)
Sand in the Face were from New Jersey and existed at a time when New Jersey was becoming a hotbed for punk and hardcore. They shared bills with their neighbors such as Adrenalin OD, Bedlam, Sacred Denial, Mourning Noise and lots more. I remember reading about them in scene reports in Maximumrocknroll and being interested not only for their name, but for the fact of where they came from and that the reports on them all sounded good.

If they released a demo to the masses, I never came across a copy. They appeared on the Hardcore Takes Over 2 compilation on Dirt Records, which was a compilation of New Jersey bands. They also had a song on the rare and obscure Master Tape Volume 2 compilation on Affirmation Records, both which came out between around 1983 and 1985.

In 1984 they recorded a 16 song full length album that wouldn’t see the light of day until 1986. It was released on Twisted Records which I am pretty sure might have been their own label, and was manufactured and distributed by the Independent Label Alliance, who from what I understand, screwed over everyone they worked with and must have had some evil contracts as I believe everything that ever came out under that umbrella has never been reissued since by anyone. When the records were pressed, the labels were placed on the wrong sides so they put a sticker on the shrink wrap stating “Limited Fucked Up Edition” and stating the labels were reversed. There never was a second pressing, so every copy out there has the pressing error.

After that, they must have broken up and drifted off into obscurity as I never heard or read anything about them since. They were a 3 piece band: Paul on vocals/guitar, Michelle on bass, and Gus on drums. Their last names were not listed on the record so I have no clue what the members went on to do after S.I.T.F., if anything, nor what they may be doing today. If anyone from the band happens to stumble across this, please get in touch as I’d love to get some more information about the band.