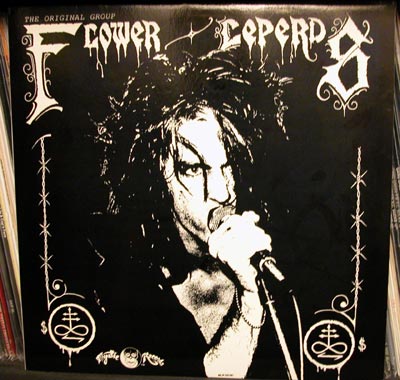 Back in the mid 80’s when I was in high school, I used to buy tons of compilations. Back then, the compilation was actually something pretty special and it was a great way to discover new punk rock bands. If I ever heard of a band that was on a comp, it was reason enough for me to buy the record to check them out, and thus end up discovering a slew of other bands I never heard of before. Mystic Records was notorious for releasing compilations and I bought them all.

It was on Mystic Sampler #2 that I discovered the band, Flower Leperds. They had a song on their called “Preacher’s Confession” which told the story of a preacher that reached the boiling point dealing with all the morons who come in looking for salvation. The song easily stood out as the best on that record and I immediately sought out everything I could find by them, which wasn’t much. Through their short career in their original lineup, they only released one 7″ and had a handful of songs on some compilations, all on the Mystic Records label, among them was Let’s Die and Covers.

Musically they were like gothic hardcore with a bit of metal thrown in the mix. Perhaps like the bastard stepchild of The Misfits and 45 Grave. After they recorded the Mystic stuff, they seemed to vanish into thin air. They would later be resurrected in the late 80s with Tony of The Adolescents as their new front man. I am not sure why the original singer left. The later Flower Leperds records were more rock/metal, and not nearly as good as this original stuff was but still good in their own right. It was just a different sounding band at that point.

The band existed in the early/mid 80s and it was around 1988 that Mystic Records collected all their recorded works onto this LP, titled The Original Group. The songs were remixed and sound a little different, though much cleaner than the versions on the 7″ and compilations. While Mystic was always known for cheap production values, I thought the cover art and overall package of this release was among their best stuff, though the band was largely overlooked and didn’t get the kind of attention that bands like RKL and Dr. Know did. I’m currently in the process of talking Doug Moody (owner of Mystic) into finally reissuing this stuff on CD and I hope that it will be next in line after the next batch of reissues currently in the works.