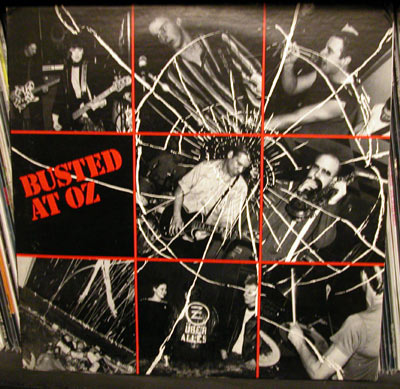 Selections from The Punk Vault [Busted at Oz]

Since New York and Los Angeles had their own regional compilations, it seemed only fitting that Chicago should have one too. In the early days of punk, there were a few clubs that catered to this new style of music and they became regular hangouts for the people. Sadly, I was a little too young at the time and would discover punk for another couple years, so I missed out being involved in the first wave of the punk scene as my exposure didn’t happen until around 1983.

There was O’Banions, there was La Mere Vipere, there was Space Place and there was Oz, and Oz, and Oz. Yes Oz was in three different locations throughout the years, and it was the third and final one (on Broadway Ave) that a young Timothy Powell would record a bunch of local bands for a live compilation record.

The lineup was a who’s who of local punk, featuring such bands as The Effigies, Strike Under, Subverts, DA, Silver Abuse, and Naked Raygun. Autumn Records also put out both DA records, and the first Effigies album. Sadly, with the exception of The Effigies record, none of this stuff has ever been reissued. There were folks trying to get a proper reissue together of this compilation, but sadly infighting, greed, and other issues seemed to have doomed its existence forever.

My favorite track on here is “Libido” from Naked Raygun. This version features the earliest lineup of NR, and was far superior to what they later recorded for the Throb Throb album and Flammable Solid 7″. Hopefully someday the parties involved will work it out to make a CD reissue happen, with the rest of the material that was recorded for the album but not released. It would be a shame if these recordings were lost forever and the only people that can enjoy this punk artifact is a handful of record collectors.