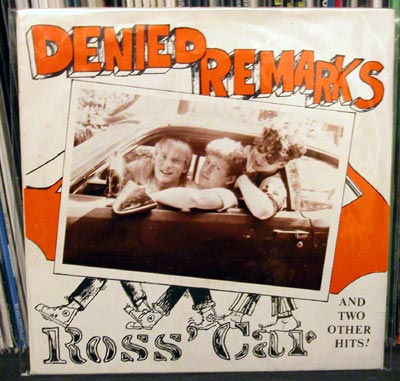 In keeping with the current theme of DuPage punk from the early days (especially revolving around the Downers Grove area), this brings us to Denied Remarks.

Denied Remarks was a three piece band of my fellow High School punk chums consisting of Andy Young (who was half-owner of Landmind Records along with Dan (aka: Cheddar Nines, aka: Klown #1)), Chris McCracken, and Robert (Shrub) Byrne. Shrub and Chris did time in Dead Fink and Happy Toons before this and as far as I know this was Andy’s first band. They were more of a pop/punk band that was heavily influenced by Dickies and Buzzcocks. They certainly had a much more accessible sound than the rest of the bands around the punk scene at the time and had they stayed together, they probably would have become pretty popular.

The band lasted for a short time and this was their only official recorded output aside from being on the Immense Decay compilation that I put out in 1987. They recorded a demo that didn’t get circulated aside from copying it for friends. It was songs from that demo that appeared on the aforementioned comp. After Denied Remarks called it a day, Andy kept Landmind Records going for a short spell and put out a couple of college rock 12″s and totally strayed from the punk scene. Rumor had it that he joined some crazy jesus cult, though in an email I received from him about a year and a half ago he vehemently denied it being a cult. The jury is still out on that one but anyone who gives away their entire record collection and not to me, is obviously NOT thinking clearly!

The title Ross’ Car was a story about Ross’ (singer of Dead Fink) Duster that sat broken in his driveway for an eternity.