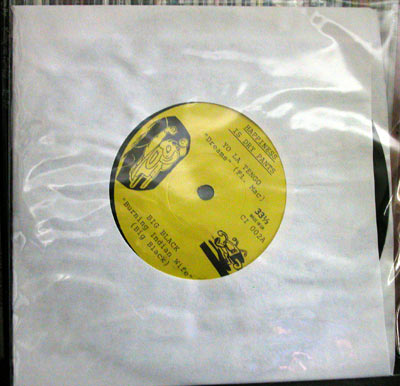 I don’t think Big Black really needs much introduction. Unless you have been living in a cave the last 20 years, chances are you have heard of them, or at least the man who started the band, Steve Albini.

Big Black started as a one man operation with a drum machine and put out the Lungs EP on Ruthless Records. The record had the distinction of each copy coming with a unique insert, usually something found in Steve’s home. After this record, Big Black would become a real “band” and have more than one member, but always have Roland (the drum machine) as a drummer. For the time it was very unique and no one else sounded like Big Black. Their buzzsaw guitar sound was clangy and unique. The band endured only minor lineup changes and Jeff Pezatti even did a very brief stint on their second EP, Bulldozer. That record had the distinction of having 200 come in metal sleeves that were acid etched with the band name on the front. Apparently Steve worked in some sort of steel factory at the time and made them in his free time.

They’d do some more EPs and a couple albums before calling it quits, each record getting better than the last (which is very rare for a band to do), and they went out on a huge high note with their Songs About Fucking album.

A handful of years ago, Touch and Go had the good sense to reissue the Big Black catalog as well as a live album and video. Well, while they did have good sense, they did not have the complete sense as a handful of tracks from various compilations to this day remain unavailable, including the God’s Favorite Dog compilation that Touch and Go released on LP but never reissued on CD, and features some great tracks by Big Black among others.

Another compilation track that was omitted in their collections was a 7″ that came with an issue of Chemical Imbalance fanzine. This was a four band compilation and is the only place where this particular Big Black song can be found. Hopefully they’ll go back and collect the rare tracks onto a CD someday so everyone can have them.

As to where they are now? Steve Albini is a famous recording engineer and has recorded countless bands and can capture a drum sound like no other. He also was in Rapeman, and now Shellac. Santiago Durango is now a lawyer (he also did time in an early version of Naked Raygun that was pre-Big Black).