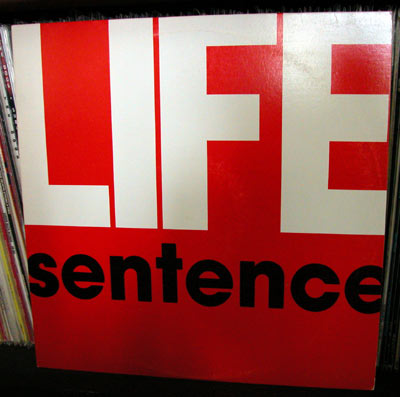 Life Sentence – LP (1986 Walkthrufyre Records)
Life Sentence were a Chicago hardcore band from the mid ’80s that had a fairly sucessfull run but not without its share of drama. They played tons of shows in the city and opened for a lot of bigger touring bands. They recorded a demo tape that was pretty well distributed and a year or so later they’d release their first, self-titled album.

It was after this record that all the trouble would happen. The band pretty much split in two and the two sides were suing each other over the name of the band. I remember all the scandal and shit slinging in the pages of MRR during this time and wonder why those guys couldn’t just work out their problems and get back to the task at hand, being a good band. Eventually someone won and they released a 2nd LP and a 7″, neither of which was nearly as good as this first record, and it didn’t feature the same members as the first one either. If I had the time I’d try and dig out those old MRRs and reprint them, but they are in boxes stashed away in a closet of the Manor, buried under a pile of other boxes and that alone would be a full day’s project just to dig out.

As to what happened to them, that is a mystery to me. I think a couple of them are still living in Chicago. I know this album was eventually bootlegged by someone actually in the band last year with bonus demo tracks and someone else from the band recently paid a visit to Reckless Records demanding to know who put it out because he claims he owns the rights and has been trying to get it officially reissued. The guy, as I was told, was obviously gimmicked up on some drugs, and appeared to be pretty down and out. I didn’t get his name, neither did the person who told me the story (an employee). So it would appear that time might not have healed all wounds, nor has it been kind. Hopefully someone will straighten out the mess and maybe someday this thing will get the proper CD release that it deserves. Until then, it sadly remains in the hands of only a few.