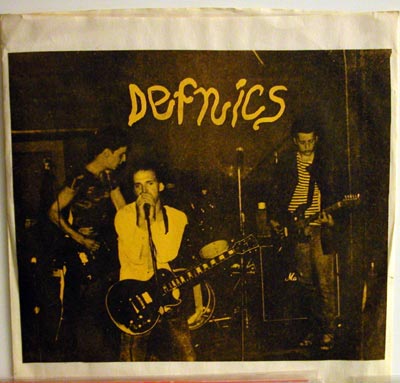 Selections from The Punk Vault [Defnics]

Defnics – 51% 7″ (1981 Terminal Records)
My first exposure to this band was on the Cleveland Confidential LP. All it took for me to buy a compilation back when compilations were good and not the watered down worthless things they are today, was for there to be either one band I liked on there, be on a label I owned a record on, or at least contain a band or two I’ve heard of. I discovered a lot of great bands this way, and this is further proof.

I don’t know much about them, other than that compilation, and this single was all they did in their two years together. This single was released on Mike Hudson’s label, Terminal Records. Mike Hudson is in The Pagans, who were the most famous band from the old Cleveland punk days, and perhaps also the best. Later upon Defnics breaking up, one member would join The Pagans in their later years. The best place for Defnics info is the story about the band written by one of its members found here on the excellent Cleveland Punk Site.

The “picture sleeve” for this record is pretty crude and low budget. They printed up the picture and glued it onto plain white record sleeves. Now that if that isn’t DIY then I don’t know what is!

Where are they now? A year or two ago they reformed and put out a new 7″ and it was a pretty good record. I believe it was on Smog Veil Records. I think they still do the occasional show around the Cleveland area too.