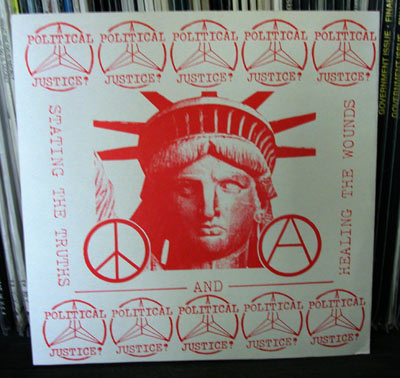 I wrote this one up on 11/14/04 but set it to “draft” and never realized that I never published it! I correct that mistake now and the intent was to have this come out at the same time as all the other local punk. Not that there won’t be more local punk in the future, but the opening sentence below makes a lot more sense if you keep this in mind.

I figure I may as well blast through some other selections from the local punk scene from back in the day since I seem to have that theme going this past handful of entries.

At the same time as bands like Dead Fink and Happy Toons, over in Glen Ellyn, a batch of fellow punks put together a band of their own and were in theme, a lot more serious. Political Justice were a four piece, and featured a young Brian St. Clair on drums, and Wesley Kidd on guitar. Brian would later go on to play in the Thrill Kill Kult for a short time and he and Wes would also play in a later lineup of Rights of the Accused, and later were in a band called Triple Fast Action that garnered some success. Brian also did time in the very popular band, Local H.

They’d gig around the city, record a demo that didn’t get much circulation, then they put out this single and called it quits. The demo is on my “things to burn to cd” list, and they were also featured on the Immense Decay compilation that I released in 1987. After Political Justice called it a day, Wes quickly joined Rights of the Accused, at a time that they were still a punk band,  and played on their 7″ (to be an upcoming selection very soon). As you could guess by their name, the band was a political hardcore band. Had they stuck together longer and done a couple more records, they probably would have had a pretty good following, but alas they didn’t and are sadly mostly unknown in the larger world of punk.

Listen to  “One Moment of Empathy” from the 7″