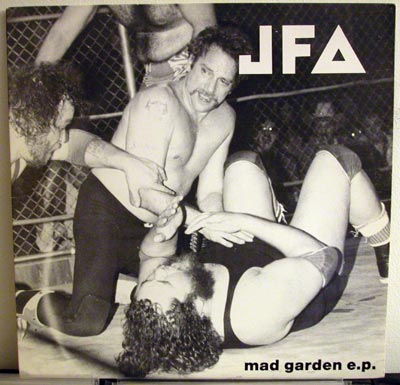 Selections from The Punk Vault [JFA]

JFA (short for Jody Fosters Army) formed in the deserts of Phoenix Arizona in 1981. Four skateboarders got together and decided they wanted to form a band after being inspired by seeing DOA play a show that same year. The band’s goal was to play fast and skate, and that is what they did. They didn’t even bother releasing a demo, the first thing they went and recorded was their now legendary Blatant Localism 7″ on Placebo Records.

They were very active back then always playing shows, touring and releasing records. They followed up the 7″ with the amazing Valley of the Yakes LP that saw them become more polished and mixed hardcore with surf sounds. Another self-titled LP followed up a year or so later and that leads us to this EP.

Mad Garden is an homage to Madison Square Garden. Not the one in New York where they have huge events, this one was in Phoenix, and much like its larger cousin, they would hold wrestling events at the venue regularly. Someone started booking hardcore shows there on the off-nights (it may have been Tony Victor but I’m not quite sure) and a legendary Phoenix punk venue was born. The bands would actually play inside the wresting ring! There is a great picture of Mighty Sphincter playing at Mad Garden on the cover of the This is Phoenix Not the Circle Jerks compilation. Eventually the place was shut down and sold. It became a flower warehouse and if I had to fathom a guess, today it is likely a strip mall or a Home Depot.

After this EP, JFA put out another full-length album that showed a drastic change in sound. Brian and Don moved to CA and the band halted for awhile as they had only half a band, and the record label they were on since their inception had ceased operations (Placebo). In 1991 they got a new bass player and drummer and self-released the Lightning Storm 7″. A couple years and a couple drummers later, they released another 7″ on my label. A couple more years and drummers would pass and they’d do an album on a label started by someone from around here who used to work for Rotz. The band took another hiatus after that until I released a split 7″ with them and The Faction. This year, with another new bass player and drummer on board, they have resumed playing shows again. I hope they’ll record some new stuff and if they do, I’m always open to do another 7″ of theirs.

Alternative Tentacles last year reissued their earliest stuff on a collection called We Know You Suck and yours truly contributed to the liner notes of that CD. A full vinyl discography for the band can be found on the Spontaneous Combustion site.