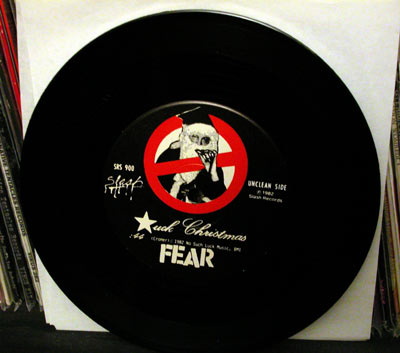 Fear formed in 1977 and a year later put out their first 7″ (which I still need a copy of by the way). A few years later they’d finally release an album and this 7″ on Slash Records. Fear would insult their audience, they were great at playing the heels and getting a rise out of the crowd, as evidenced by their performance in the movie The Decline of Western Civilization. They also once played on Saturday Night Live which caused quite a ruckus and for years they refused to rerun that episode, though now that punk has become accepted, I notice it will be on every now and then. They got that gig because John Belushi, who was a cast member on the show at the time was a huge Fear fan and somehow conned Lorne Michaels into booking the band as the musical guest. The late Donald Pleasence was the host of that particular episode.

This 7″ features two versions of the song, both clean and dirty. It was never issued in a picture sleeve, though many copies had a rubber stamped image on the paper sleeve.

In the mid to late 1980s Fear put out a second album on Enigma titled More Beer though it wasn’t nearly as good. Members came and went and eventually the band called it quits. Their retirement wasn’t permanent though, well at least not for Lee Ving. On top of a fairly respectable acting career, Lee resurrected the Fear name and enlisted a new crop of youngsters as his backup band and still plays shows from time to time. To the best of my knowledge, it has been years since any original members other than himself played/toured with him as Fear. 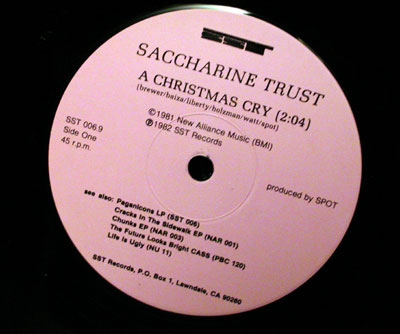 Saccharine Trust was founded in 1980 by Joe Baiza and Jack Brewer. They put out one really good and original record called Pagan Icons on SST Records. After that, they got way into the avant-garde experimental side of things and started putting out records that bared little resemblance to that first record. The band hung it up in the late 80s for awhile but in 1996 the original co-founders got back together and reformed Saccharine Trust with a couple new members. They are still around in some form and have a website up with tons of information.

This single was some sort of promo-only thing that SST made. The track was also available on the Chunks Compilation on New Alliance Records (later reissued by SST). It was not issued in a picture sleeve.

As always if you have any additional information or were in the above bands, please get in touch.