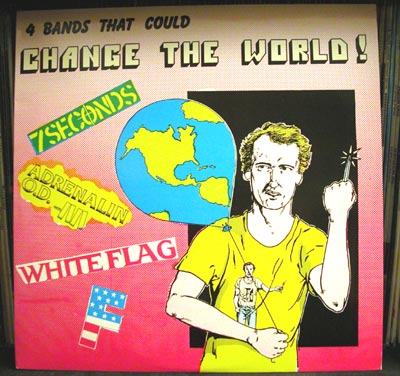 This here was a collection of four pretty well known punk bands from different parts of the US who were all still very active in the mid to late 1980s. While all the band’s respective labels had their stamp on this record, it was Gasatanka (White Flag lead man Bill Bartell’s label) who did all the work and actually released it (through their blood pact at the time with Dutch East India.

The compilation featured 7 Seconds (Reno, NV), White Flag (Hollywood, CA), Adrenalin OD (New Jersey) and F (Florida). Most of the songs on here were unreleased at the time, and to this day a good portion of the material found in these grooves is still exclusive to this slab of wax. Each and had half of one side of the record, about 5 songs each.

The record was also licensed to Weird System Records in Germany and they added the band, FOD to the lineup and dubbed it Five Bands that Changed the World. They removed tracks from each of the Four bands to make room for the 5th.

All the bands on this compilation with the exception of AOD are still around today. There is some version of F still playing and they have a website. I emailed them and asked if they had any affiliation to the punk band F and they claim that they do. When I responded and asked for any further information however, my email went unanswered. Some members of AOD are in various bands, 7 Seconds still tours and puts out records and White Flag are a big hit in Spain and overseas and still put out records. All the bands will eventually get their own features here with their own records.

As always, if you have any additional information or were in one of the bands on this record, please get in touch.