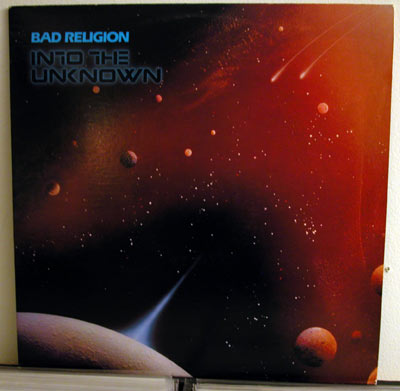 For this xmas eve, I thought I’d give everyone a special treat!

I think everyone is familiar with Bad Religion, they are still alive and kicking as I type this, and put out an album every couple years and still tour constantly. At one point they were even on a major label for awhile.

But this story is of a once great hardcore band, who after one album, decided that a change was in order. Not wanting to play the simple hardcore tunes that garnered them a good sized fan base even back then, they felt it necessary to add some keyboards and make a prog-rock album.

Yes, you read that right, they put out what can be best described as a prog-rock album. Aside from the vocals sounding similar to their first album, this record bared little resemblance to the Bad Religion who gave us a great 7″ and a great first album. The songs were cheesy and often long and it reeked of wanting to be 80s radio hits. I don’t know if they were all doing acid or what but it has to stand as one of the worst decisions a band ever made. They’d eventually realize it too as if you may have noticed, not only is this record out of print, but it is seldom ever mentioned by the band, and completely ignored in their retrospective collections.

They pressed around 10,000 of these but shelved a good portion of the pressing when they probably realized what a bad idea it was. Rumor has it that the records were being stored at Bomp’s warehouse and someone there decided to slowly keep selling them until they were almost all gone. The thing fetches a hefty sum these days and it is pretty certain that a reissue will never see the light of day ever. Really to curb bootleggers they ought to include it on something but I guess they are so ashamed of it that it isn’t even worth it to them.

Every now and then I’ll play this record to someone who likes the band these days but never heard of it and their reactions are always shock and disbelief. That alone is reason to always have this record in one’s collection.