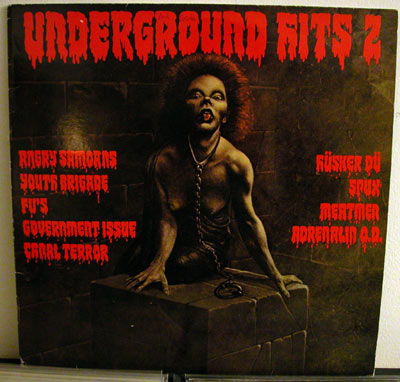 Various Artists – Underground Hits 2 LP (1983 Aggressive Rock Produktionen)
Since so many of my stories start with how I discovered a band through compilations, I figure I should probably start featuring some.

In the early to mid 1980s, hardcore punk was on the rise and in some cases the records were selling in the thousands, especially the LPs. There was a whole slew of independent record distributors stocking this new exciting music and the records were finding their way into more and more stores. These distributors would all eventually fold and owing most labels tons of money but that is another story.

During this time, a German label called Aggressive Rock Produktionen had the idea to start licensing some US hardcore records for release overseas in their home country in an effort to have the records available locally, and not as pricey imports. They had great taste in hardcore and released some of the best records from The Necros, Meatmen, Misfits, Husker Du, Black Flag and more. Many of their releases ended up getting imported back into the states and found their way to record shops, especially The Misfits Evilive 12″ which was originally released domestically at a 7″ but would be out of print and unavailable until the German 12″ came out on this label.

The label also did a pair of compilations called Underground Hits. Volume One had a pretty equal mix of US and German bands while this one, Volume Two, featured mostly US bands. What was unique about this one was that some of the tracks on here were exclusive to this comp and would be that way for years. These days most of them have finally been reissued on CD or vinyl, but the one Youth Brigade track that I picked for this entry for some reason was left off their Out of Print CD collection of rare tracks, and its a crime if you ask me as its one of their best songs.

While the cover art was kind of cheesy and looked like a metal record, this ranks quite high on my list of great compilations. Incidentally, it was this comp that turned me on to The Meatmen and The FU’s. As for the label, they folded sometime in the late 80s/early 90s.

As always if you have any additional information, or were the owner of the label, please get in touch.