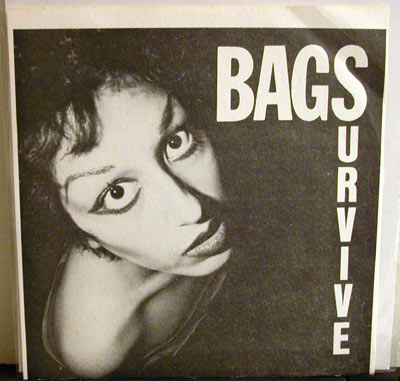 Selections from The Punk Vault [The Bags]

When I was a young teenage punk, I had a bias against bands with female vocals. I am not sure why I did, but the fact was that I did. The only band I really liked back then with a female singer was The Avengers. My like for that band would lead me to a purchase that would start the ball rolling in changing my opinion on female-led punk rock.

I was at a record convention way back when I was a young angry teen fresh out of high school when a fellow there would approach me and tell me he had some Dangerhouse Records to sell. He had a few unplayed copies of both The Avengers and The Bags 7″ and he was selling them only as a set, and for what at the time seemed like a very fair price (which by todays standards would seem like the steal of a century). Really wanting The Avengers 7″ and also wanting to advance my goal of having every Dangerhouse record, I forked over the cash to the gentleman and got my records.

Upon playing that Bags single it was like a light went on in my head. The thing kicked a whole lot of ass, and I liked it a lot more than the “Alice Bag Band” songs on The Decline of Western Civilization soundtrack that I had and practically worn out back then. Unfortunately, the only recorded output of The Bags was limited to this single and one song on the Yes LA compilation.

Having not been there at the time, and not having much in the way of a written history to go off of, I went straight to the source and emailed Alice Bag to tell her of my intentions of featuring this record as a Vault Selection and asked if she’d like to contribute a band history. She promptly responded and not only gave her blessing for posting the track, but sent this band history as well…

Originally, The Bags was supposed to be an all-girl band. Patricia and I started it and tried to find other female musicians to play with us, but that’s not how it ended up. The whole idea for The Bags started out as a joke. We were going to play with paper bags on our heads and never reveal our identities, but at our first show (at the Masque) Bobby Pyn, (Darby Crash), ripped my bag off and ruined my plan. The first lineup had Janet Koontz on guitar, Pat Bag on bass, Alice Bag on vocals, Joe Nanini on drums and Geza X on guitar. Other musicians after that included Mark Moreland, Nicky Beat, Don Bolles, DJ Bonebrake, Ricky Stix, Johnny Guitar…I could be forgetting some others. The Bags and The Germs, respectively, had reputations for the most anarchic live shows of the early Hollywood bands and I suppose we had a harder edge than most. We were pretty aggressive on stage as well and were banned from our share of clubs (like the Germs).

Eventually, the musicians solidified as the lineup that recorded the Dangerhouse sessions: Alice, Pat, Craig Lee on guitar, Rob Ritter on lead guitar and Terry Graham on drums. Once the line up was set the band really tightened up and was able to move forward. It was at that point that Dangerhouse asked us to do a record. We had to record in the middle of the night to get cheap studio time. Geza X (who was no longer in the band) produced the single, ‘Survive’ and ‘Babylonian Gorgon’, and there were four songs recorded at that same session. Geza played a dirty trick on me. He asked me to lay down a practice take and then insisted that we keep that first take. Of course, it made it very difficult to double track my vocals because I hadn’t planned on singing the songs the same way twice. If you listen carefully, you can hear some parts where my tracks didn’t exactly match.

The Bags played up the West Coast as far north as Seattle and south to San Diego, but no further. By the late 1970’s we had started to pull in different directions musically and the band had a messy, ugly parting of the ways with Pat, who subsequently claimed to own the name “The Bags”, which is why the remaining four members appear in The Decline of Western Civilization as the “Alice Bag Band”. The band split up for good shortly thereafter without ever releasing another studio recording.

Alice is still active playing music and now has a new band called Stay At Home Bomb. Pat Bag (Patricia Morrison) is now married to Dave Vanian and was playing bass in The Damned until she gave birth to her and Dave’s child last year. Geza X is still producing and recording bands. Craig Lee and Rob Ritter are now deceased. Terry played with Rob in the Gun Club for a couple of years and now lives in Texas, still surfaces from time to time.

Thanks a lot Alice for the history!