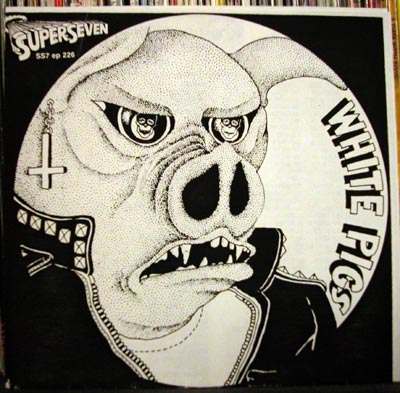 This one is a unique entry as it is featuring two records by the same band, which covers different eras of the band’s existence.

Stop me if you’ve heard this before. It all started with a compilation….

While not an overly original way to start one of these features, it is a testament to just how important compilations were back then. For awhile I’d discover more bands through compilations than I would through fanzines and simple word of mouth. Of course these days the compilation is all but useless. This particular compilations was called Let’s Die and it was one of the many Mystic Records comps. It was here that I discovered the White Pigs. I liked the song so much that I’d seek out their other recordings, which at the time was a pair of 7″s and a demo tape (which I still have).

I contacted Keith Grave, founding member and bass player for the White Pigs story and he chimed in with some info regarding these particular releases. He also penned the White Pigs history on the Kill From The Heart website, which I lifted part of for this band history.

The White Pigs formed in CT in 1980 out of the ashes of Zak and the Soda Boys. Lead singer Dave Death came up with the name as a goof on a neighborhood dog that used to shit all over the place. That line up did one Shamrock Pub show, then because of inner band problems disbanded.

In 1982 singer Brian Ripthroat and original founding member bassist Keith Grave agreed to reform the band, but it took until the summer of 1983 to locate drummer George Butterrick (formerly of the Separates) and guitarist Chuck Duncan, to get the band rolling again.
They then released their self-titled 7″ EP on Switch Kwilson Productions.

They released a second 7″ in 1984 called Evil Stalks the Innocent on their Songs Of Sin label. It was recorded live and they came on red vinyl. At the end of that year is when they appeared on the aforementioned compilation and had recorded the demo tape.

That leads us to their final release as a band, an EP on Combat Records that featured a different lineup than on the earlier works. After this came out, the band called it quits. It would be a few years before the posthumous 7″ on Mystic Records and the LP on Walkthrufyre would be released.

Keith had the following to say about these particular records chosen for this entry. 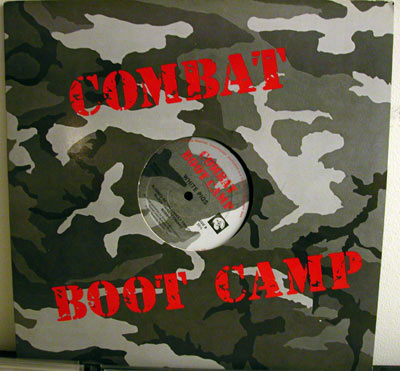 The poor bastards, I get them a full Metal Blade LP. deal, which included an appearance also on an upcoming Metal Massacre compilation LP. What do they do? They go with the bootcamp series that only offered them a 12″ EP. release. On top of that, the jacket is all camouflaged that didn’t even print the members names or contact addresses etc.

I was booted out of my own band by then because of personal differences, mostly with guitarist Steve Bertrand, so I had no say on which deal to go with. My replacement on bass, Dave Flannery, couldn’t play my bass lines on most of the recordings that made up the 1987 bootcamp release, so Steve played both guitar and bass on this record.

The remake of “Deathway” is lifeless and sterile. The Munsters Theme remake is slightly better than the original demo recording I played on, but boy that no fills allowed bass playing on the record grades on my nerves. Some new tunes were added in “Body Parts”, “Unholy Trinity” that sucked and a studio version of “Blood Sucking Freaks” that was good, but for my money, buy 1990’s Songs of Sin on Walkthrufyre Records. It has the full 1985 demo plus a few cuts from the Combat EP.

In their full bootcamp reissue, Century Media Records ,that owns the Combat catalog now, failed to include the White Pigs bootcamp EP with this reissued box set. Singer Brian Ripthroat told me years later he almost cried when he saw the finished release of the bootcamp record, it was so cheaply packaged and cheesy looking.

Doug Moody by now was running out of money and on the run. I used to call him to inquire on when this record was coming out and he used to disguise his voice as his mother and say “Doug isn’t in” but the bastard took pity on me and actually sent me the 100 copy payoff he promised me of this record.

In a nut shell Mystic went through Bill Smith pressing plant, first mistake, colored vinyl copies sounded horrible. Mistake number two, Doug strays from the original master I sent him and deletes some unreleased songs that are listed on the cover of the record. Nice packaging though, I like this record the best out of all the White Pigs releases.

This single came on both blue and purple vinyl. I believe there was 500 of each color.

As always, if you have any information you’d like to share or were one of the other members of White Pigs, please get in touch.