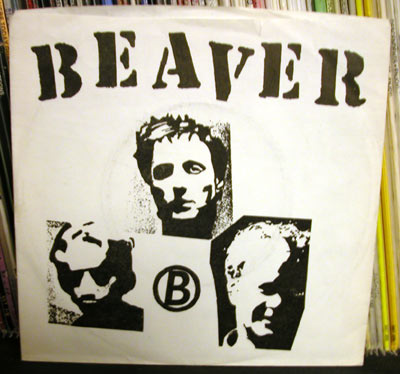 Selections from The Punk Vault [Beaver]

Many years ago, my immense love for Government Issue would lead me to discover a little known 7″ that featured Tom Lyle in his pre-GI punk days. I didn’t know a thing about the band. They on the Bouncing Babies compilation, but I didn’t even notice it until after I took possession of a copy of this record. I’ll admit to owning that compilation since I was a kid in high school, yet not playing it much (as an aside, does anyone know what band it is that is the unlisted final track on the record?).

Beaver started out as a solo project of Tom Lyle’s. Then it became a real band, albeit short lived. Here’s a brief story Tom shared with me.

I was in a DC progressive/new waver band, but became VERY bored with the whole scene. After seeing the Dead Kennedys in April 81 at the 9:30, and then the Government Issue/Youth Brigade/Minor Threat show in June 81 at the 9:30 I started making home demo tapes of me playing all the instruments in the most hardcore style I could come up with. I wanted to get a band together to play out live and used they rhythm section from Square One, the awful band I was in at the time. Then we got asked to record a record for Choice Cuts.

Choice Cuts was a record store in DC back then that started a label and I’m pretty sure this was the only thing they released.

It wasn’t long before Beaver disbanded and Tom Lyle joined Government Issue. GI is a story for another day of course. I do not know what became of the other two guys.

As always if you have any additional information or were one of the other members of Beaver please get in touch.