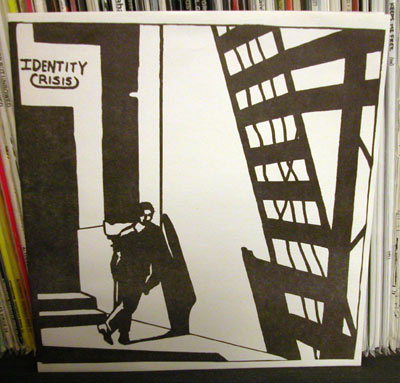 Unless you live in a cave, you probably heard of the band Soundgarden. What you may not know is their ties to Chicago and early punk/new wave music. That is where this single comes in.

In 1980 a group of suburban Chicago high school students formed a band called Identity Crisis. They played a grand total of 5 shows, none of them in the city proper. Before disbanding, they managed to record this lone 7″ and get their friends who did Cirkle Records to release it. I think the label was the product of the guys in Epicycle, but I’m not certain. There was 500 of these pressed.

One of the members of Identity Crisis was a fellow named Kim Thayil, who would later move to Seattle, form Soundgarden, and help put “grunge” music on the map, not to mention put out some fine records. And where did Soundgarden get their start? On Sub Pop, which was the label started by Bruce Pavitt, brother of John Pavitt from Identity Crisis! I don’t know what happened to the other members of this band.

As always, if you have any additional information, or were in Identity Crisis, please get in touch.

UPDATE: Thanks to my fellow record collector Justin F who passed along the email address for John of Identity Crisis, I got the following response from him…

The write up is pretty much on. I often forget that we played out so seldom. As I recall it was Andrew and Robert from Epicyle that recorded us in Kim’s basement. It was done very quickly – probably on a four track reel to reel. It was a very exciting time. I’ll try to find and dig through old clippings etc. to see if I can come up with any additional tidbits. We did record five songs for a second record that never materialized. It was recorded by a fellow named Tom Staples. I’m much happier with the tracks from this second recording (I actually sing on key and the “British accent” isn’t quite so pronounced). Kim’s song “Dinosaur Beach” has some very tasty bits and gave me a chance to do some fun (if excessive) background vocals. Perhaps one day these recordings will eventually see the light of day? I haven’t seen or talked to Kim in quite some time. I hope to touch base with him eventually. The last time I saw him was when Soundgarden was playing at a large venue down the street from where my group (at the time) was playing a small venue. He stopped by to check us out and say hello – I was quite touched. The last I knew Joe was still playing drums in a variety of Chicago based bands. I also haven’t seen him for a while. I’ve been in a number of bands over the years. The last band – Autoliner – put out two CDs on the Parasol Label.