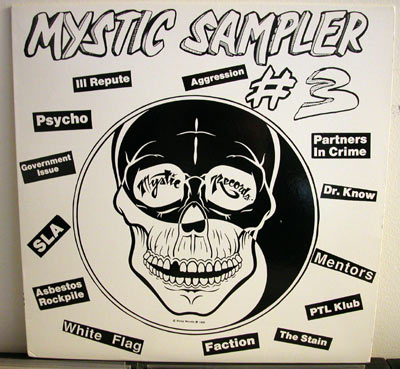 This is the third and what turned out to be the final record in the Mystic Sampler series. By this time a lot of the old Mystic mainstays had either broken up, left, gone metal, or some combination thereof. A few appear on this and there was a handful of newer bands to the label. This was the weakest in the series but still had some good standouts such as The Faction and Government Issue (both who, some 15+ years later, I’d end up doing records with!).

This one seemed like it was slapped together in a hurry. Many of the song titles on the cover are completely wrong, most notably the Government Issue and Ill Repute tracks. There was 1000 pressed on white vinyl, and then another pressing on black vinyl (probably another 1000).

There was a plan to do a fourth sampler with a black cover but it never saw the light of day.