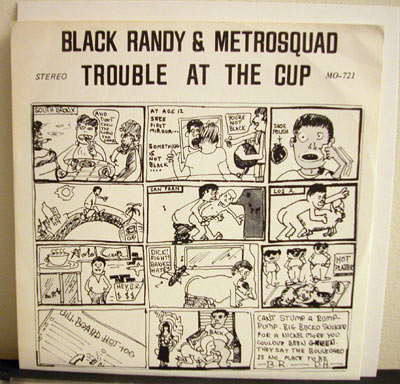 Selections from The Punk Vault [Black Randy and the Metrosquad]

Black Randy, if any of the stories in We Got the Neutron Bomb are true, was perhaps the most wild and crazy of all the punks from the early Los Angeles scene. He lived fast and died young and left a few records and a part of a legacy in his wake.

Black Randy was a “con and street hustler” who became part of the blossoming punk scene in the mid 70s. He helped start and run Dangerhouse Records along with Pat Garrett and David Brown. It was no surprise that the label released his own band’s recordings of course, and those are perhaps the most “difficult” to listen to of all the label’s output.

The band, which consisted of members of other well known, and now legendary, bands, played plenty of gigs and put out three singles and one album (which ended up being the final release on Dangerhouse). Musically they were like a punk rock soul-funk band. Not that the bands sounded alike anyway back then, but Black Randy sounded like nothing that came before, or since. They were perhaps a big joke band, and their lyrics were certainly full of satire, but somehow I found charm in such songs as “Loner with a Boner” with it’s chorus of “I’m a loner with a boner and I’m going to telephone her”. Incidentally, that happens to be a favorite of Lady Combustion who wondered why I didn’t pick that song in favor of the title track of this single, which happens to be my favorite Black Randy song.

A few tracks can be found on the Dangerhouse Volume One and Volume Two on Frontier Records. Sympathy For the Record Industry had reissued the album for a short time, but it seems to be out of print again.