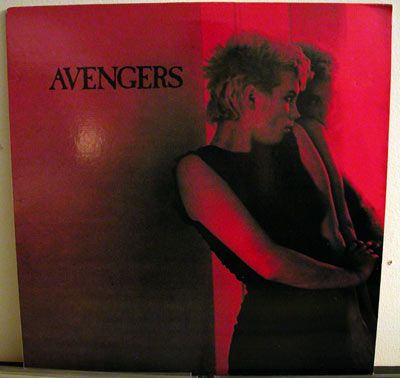 Selections from The Punk Vault [Avengers]

In hindsight, I guess I could have included this as part of the feature from the other day, but since I like to keep those features as separate entities, you get two Avengers features in one week.

In their short time together, the Avengers made quite an impact and were very influential in the punk rock world. The band formed in 1977 when a 19 year old girl named Penelope Houston moved to San Francisco to go to art school. She met up with some like-minded punks and formed a band and immediately left their mark on the then-small punk scene.

The band played its first show at the famed Mabuhay Gardens in June 1977. At a some point Jonathan left to be replaced by Jimmy Wilsey (aka Jimmy Blaze). I believe it was due to him not getting along with one of the other band members.

In their time together they put out exactly two records. Their first was the now-legendary “We are the One” 7″ on Dangerhouse Records. That was followed up with a 4-song EP on White Noise Records. The band even opened up for the Sex Pistols last ever show at Winterland in San Francisco (well, their last show for nearly 20 years, after which they did a reunion tour).

The band basically fell apart and called it quits in 1979, but stuck together long enough to finish out a few show commitments they had at the time, one of which is now available on the Zero Hour LP that came out last year. After that, Penelope went solo and has continued to record and release music ever since.

This album came out in 1983 and contained a fair share of controversy, much of which is touched on in the “many flavors of” feature on this record. Suffice it to say the band never got paid for it, were sued over it, and their recordings are now sitting in some guys home somewhere in San Francisco being kept from the rest of the world with the exception of some inferior sounding bootleg copies that are floating around. I said it before and I’ll say it again, this is one of the all time best punk rock albums and the fact that some kid or some old punk can’t go to a record store and at least buy it on a real CD is a crime.

As always if you have any additional information you’d like to share, or were in the Avengers, please get in touch.