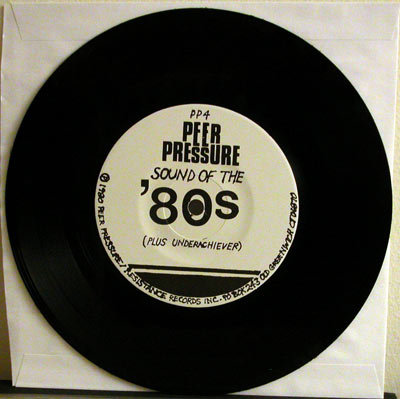 This is another one of those records that was so obscure that it wasn’t until it was put on one of those Killed By Death compilations (bootlegs) that anyone took notice. In fact, it was because of that leading Ryan Richardson to go on a nationwide hunt and document his adventure, that I came to hear of this band and their one and only release.

I ended up getting a copy of this in a trade I did, and I gave up a fair amount of stuff for it. Not too long after that, someone tracked down a friend of the band who had a small stack of them and sold them on ebay for less than the value of the stuff I gave up for it. There’s some timing for you, had I put off trading awhile, I would have been able to get one cheaper in essence, but either way I’m glad I have the record.

Ryan did a thorough writeup on the band and his quest for this single over on his site and its well worth a read. I really do miss his MRR columns. Here’s a few highlights.

The band was a two-piece band consisting of J Paine and B Estes. They were around 30 years old at the time of this recording but if you didn’t know better, you’d swear it was a group of high school kids. J Paine played ALL the instruments on the record while B Estes contributed the vocals. The two were long time friends. They put out this single which they only pressed a couple hundred copies of. One of the members hopped on a greyhound bus and tried to hand-distribute the single to stores in other states (they were from CT). The “band” called it quits shortly after and never played any shows since it would have required them finding more musicians to play all the instruments that J played on the record.

A few years ago, there was a 7″ that came out of a few unreleased songs that were recorded before this single. I believe it was Ryan who put it out. One of the members lives in the UK now and the other one lives in San Francisco.