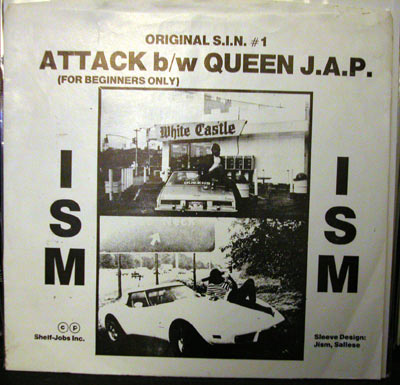 Selections from The Punk Vault [Ism]

Ism were pretty well covered here when I wrote about The Big Apple Rotten to the Core I’ll repost the full story that was sent to me “after the jump”.

This was the first Ism single that came out in 1981. Apparently, the b-side, “Queen Jap” was a hit on the Dr. Demento radio show. The song was a spoof of the Steve Martin song, “King Tut”. The A-side, featured here, showed hints of what Ism would become. It was more new-wavey than what followed. After this single, they did their infamous cover of “I Think I Love You” and then their equally great A Diet for the Worms LP.

About a dozen or so years ago, Ism put out a retrospective CD that contained some early material and some unreleased newer stuff. This single was not included on it.

This is what I did find out and the following info was gathered over the years after much painstaking research and interviews.

Jism quickly put together a band and teamed up with Sallese to write the songs on “The Big Apple Rotten To The Core” The album went on to become a hardcore and punk classic. “John Hinckley Jr., What Has Jodie Done To You” by Ism started getting commercial airplay and was probably the first “hardcore” song to get commercial airplay in NY. It opened the door for groups like “Black Flag” (who were long established on the West Coast) into getting commercial airplay in NY as well. Amy Carter, daughter of former President Carter, became a big Ism fan after the release of “Rotten To The Core”.

WLIR nominated “John Hinckley Jr.” as “screamer of the week” for two weeks straight but then DJ, John Debello, who hosted the show refused to let it officially win despite receiving 3 times the vote of the pop tune “MICKEY”. He was quoted as saying, “I will never let that song win on my show” to other employees.

The rest of the “Rotten to the Core” album quickly became a favorite among the punk community. “The Beastie Boys” and Cheetah Chrome of the “Dead Boys” were slated to be on it but couldn’t come up with a tape in time.

They pounded out the “I Think I Love You/A7” single with a wild cover photo of two apes doing it doggy style with David Cassidy’s head on one and Shirley Jones on the other. David Cassidy went nuts and was publicly saying he was going to sue them because of the cover photo so only a limited number were printed but enough to top all the college charts. The song was another cult classic. Once again, WLIR in NY had entered it in their “screamer of the week” contest after being nominated by veteren DJ Ben Manilla and Steve Jones. Once again Ism was a winner which should have landed them a contract with a major lable but once again, DJ John Debello refused to let it win on his show.

Ism was on a roll. They were doing gigs with groups like the Ramones, Black Flag, The Circle Jerks, The Smithereens. Sylvester Stallone even popped in to see them one night at CBGBs.

The rest is history. Ism records are very rare and a must have for any true collector of rare punk rock.
“A Diet For The Worms” LP recently went for $240 on an internet auction. “I Think I Love You/A7” & the two “Rotten To The Core” Albums run up to $100 and the “Queen J.A.P./Attack” single is almost impossible to find and very sought after (especially in Europe). Every now and then, you can find an Ism release at a great price on the net. Some people come across these releases and do not realize what they are worth.