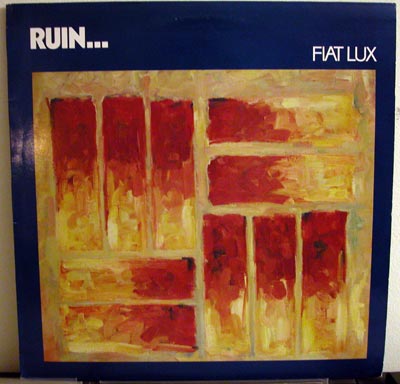 Selections from The Punk Vault [Ruin]

In 1986 some friends and I took the train to the city to see a punk rock show at Cabaret Metro. The lineup was 7 Seconds, Verbal Assault, Ruin, and SS20. We went solely for the need to see 7 Seconds and never heard the other bands. While I can’t speak for my friends, I became a fan of the 3 opening acts that nite, and the one that really stole the show in my opinion was Ruin.

These guys had the stage full of lit candles and they came out wearing white lab coats and they tore up the stage. I was totally impressed with them and immediately looked for any records I could find of theirs. The first one I’d find was this one, their second and final record. It had just come out at the time. I wasn’t able to find their first album for a couple years, when my friend, Eric, gave me some records from his collection in exchange for taking care of his cats when he went out of town. I was pretty happy that he gave that to me.

The band’s total output consisted of the two aforementioned albums, and a track on the That Was Then This is Now compilation 7″ on Plus Records (which will be covered here eventually) as well as being on the Get Off My Back compilation.

I was able to get some history of Ruin on their website, which is run by their singer, Tom.

Ruin was more than music, or at least aspired to be more. Initially, it was a propaganda project . Students of the arts, philosophy and religion, doing lab work with music. Experimenting with a way to be activists for social and individual evolution.

During the time this style was in its infancy, Glenn heard the call and joined the mutual evolution. He began scrawling poems to be roared with thrash tempo rhythms; songs that wanted to transcend entertainment.

Glenn was nurtured on artists such as the STOOGES, LEONARD COHEN, the Ramones, Sex Pistols, Stiff Little Fingers, SHAM69, and the CLASH. While he was shaping his vision, he was listening to Crass, (anarchist art punk band), and Motorhead, (seminal speed metal band). Glenn became convinced that rock could be a vehicle to help stimulate the transformation of one’s being to a higher stage of development, resulting in positive social behavior.

Ruin achieved headliner status locally in Philadelphia’s mid sized music halls. Live, they experimented with noise, genre bending, pamphleteering, theatrics, and audience participation. They toured across the States a couple of times, and in their small way, helped to promote Buddhism as a means to enrich one’s life.

Their last recording featured their flirting with mainstream rock. Theoretically, they were hoping to reach a wider audience to spread Buddhist ideas further, but basically they were becoming serious about pursuing a career as a rock band. This was frustrating as Ruin eventually found that rock as a business was overwhelming their creative efforts.

During their last year as a group, the band members evaluated their vocation and decided to pursue other courses, assuming they had done as much as they could as punk rockers on a mission.

Over a thousand dollars in debt, they disbanded before punk got pop and missed capitalizing on the growing market for old school punk in new boots.

Glenn is currently a college professor teaching courses in Buddhism. His third book is due to be published by the end of 2004. He used to have a mission.

A while back, Blackhole Records reissued both Ruin albums on a CD, but sadly it is out of print. The one thing they did though was remix the album when it was reissued on the CD, which is something I’m almost always against. In this case, I think the vinyl version sounds superior, the remixed version sounded a little too watered down.

In the late 90s, Ruin did a reunion show and they are currently putting together a documentary DVD of the band. You can visit there website here.