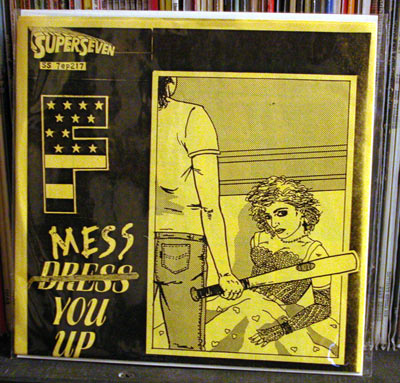 Selections from The Punk Vault [F]

I first heard about the band F on the Flipside Vinyl Fanzine Volume 1 compilation and was interested enough to check them out. Problem was finding any of their records, which at the time was limited to the You are an EP 12″. They appeared on a couple other comps and then a couple years later, this 7″ was released as well as a split LP with their friends, White Flag.

It would be many years before I finally tracked down a copy of the first 12″, and it was only after finding David Camp, the man responsible for recording that record, that I acquired one from him. A funny story about that was when I called him up and talked to him about wanting to buy one from him, his response was “well, I have a bunch of copies that the band peed on and I have to check but I think I have one mint copy left as well”. I obviously had no interest in the urine-damaged copies and worked out a deal for the mint one and finally had my F completion.

F were from Florida and much like AOD, were like a bunch of punk comedians. To F, nearly everything was a joke. I remember all kinds of hate mail in Maximumrocknroll about F, most of which were likely written by the band themselves! Some members of F also had another band called Gay Cowboys in Bondage, who released a 7″ back then at the same time.

When Sound Idea Records reissued the You are an EP record as a 7″, there was a bit of band history contained inside written by Phil Blumel. It is as follows.

The band F – no one seems to have a credible justification for the name – was formed in 1982 and released their first 12-inch record You Are An E.P. a year later. Prior to its release, the band broke up into two bands – one punk rock and the other ’70s-style heavy metal – with the same name and performing the same songs in their respective styles.

This minuscule controversy – as well as a number of childish and unfriendly pranks – brought the band to the attention of the South Florida scene. For an effect probably not half as comical as they thought at the time, the band adopted the newly minted straight edge pose, complete with Xs etc., while drinking heavily and behaving like spoiled, self-destructive, carnivorous swine.

Upon the pressing of 1,500 copies of this record in 1983, no less than 200 of the records were smashed with hammers and against walls by the band and attendees at the practice/show. Such was their idea of a punk rock record release party. Calling the police on their own shows was another party favorite, and they delighted in their last show in Fort Lauderdale where the police actually made arrests instead of the usual simple harassment.

The band toured twice outside of Florida, both times with White Flag – although their t-shirts and interviews indicated they had toured with the Ramones. The band consisted of U.S. Ken “The Duke” Decter, John “John Galt” Golf Jr., Eddie Nothing and alternating drummers Ravenous “Mike Hasson” Gangrene and Pete Moss. Tim Swingle also played bass early on. The Duke moved to California and played solo under that moniker and as guitar-man for the Ex-Idols. John is a financial planner in South Florida and Eddie (who also played for the Gay Cowboys in Bondage) is now a bill collector in Tampa. Rav has not been heard of in some time, and Pete won’t ever be again, as he died in mid-1997 while abusing some straight-edge heroin. (Rest in peace, Pete.) [Note: It appears that this is incorrect; Pete Moss committed suicide in 1997]

In the early 1990s, the F-Boys appeared in South Florida, having no other connection with the band than their name. And then, following their example, F, The Band Formerly Known as the John Birch Society were born in Gainesville in 1994 and released a fine e.p. “Die You Stupid Hippies.”

So the band split in half, and there was two F’s. One of them, presumably the heavy metal version, is still playing around Florida and has a website. I contacted them and asked if they had any affiliation to the punk band of the same name and they responded with a yes. When I wrote back to ask for some more history about F, I received no response.

Sadly, I lost David Camp’s phone number a few years ago, else I would have tried to get back in touch for some more info and stories. When I talked to him on the phone, he had a lot of great old punk stories and still was in contact with a few people from the old days. David, if you happen to read this, please get back in touch.

This particular record was pressed on both black vinyl and later colored vinyl and had two different colored sleeves (yellow and white). It has been out of print for a hell of a long time. I’m sure someday it’ll eventually get reissued on a Superseven singles collection.

As always if you have any additional information or were a member of the band F, please get in touch.

Listen to “Shoot it Down” from the record