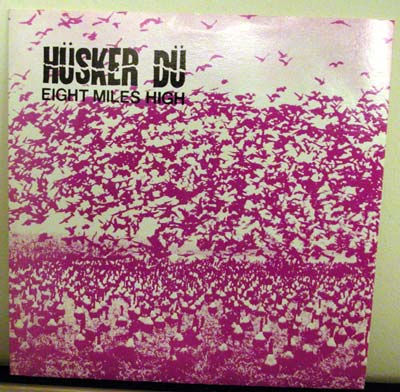 It is probably a pretty safe bet that if you are a fan of punk rock from the 1980s, then you probably have at least heard of Husker Du. My first exposure to the band came via a radio show a couple of not-yet-friends of mine had at our High School radio station. Their names were Kathy and Robert (aka: Shrub). The song they played was a cover of The Birds’ “Eight Miles High” and I was an instant fan. I used to tape their shows when I was a freshman in school because my access to money and records was limited by where I could walk and what I could buy on my allowance until I got a part time job when I was a little older. I used to rewind the tape and play that song over and over and every trip to a record store I’d look for any of their records.

Husker Du formed in 1979 in Minneapolis, MN. Grant Hart and Greg Norton were working at a local record store and met a man by the name of Bob Mould who was a frequent visitor to the store. They became friends and decided to form a band. Their name was taken from an old children’ board game which translates as “Do You Remember”. In 1981 they released their first 7″, Amusement/Statues on their own Reflex Records label.

The band hit the road and pretty much toured non-stop for years, pausing only to record more records. Their next release was the live Land Speed Record on New Alliance Records. The band recorded it at the 7th Street Entry in Minneapolis. The title was pretty accurate as they blazed thru their set without ever stopping for air. Even though that material was speedy fast hardcore, they still showed hints of the melody that would become their trademark throughout their career. Shortly after that, they put out another 7″, In a Free Land also on New Alliance Records. At the time this was the best thing they did and now stands as one of the rarest pieces of Husker Du vinyl there is, especially if it has an insert with it as not all of them did.

The band returned to putting out their own records again for their first full-length studio album, Everything Falls Apart. This is where they really got a chance to show off their now famous buzz saw guitar sound along with their brand of melodic hardcore. At the time they really were a unique band and all their stuff certainly stands the test of time.

The band found a new home in SST Records for their next record, a 12″ EP called Metal Circus. It really was sort of a co-release of sorts between SST and Reflex Records in theory, but SST was the ones who actually manufactured, sold, and distributed it. More touring followed and when the band made it out to CA, they recorded what in my opinion is one of the best punk rock records of all time.

In 1984 the band released Zen Arcade, a double concept album about a boy who leaves home to go out in the world on his own. At the time, no other band had done something like that and really no one has since. The sound was a bit more refined than the stuff on Metal Circus and the sound a bit more melodic, but it still packed one hell of a punch while at the same time showing a new side to the band. It was embraced by such things as college radio and Rolling Stone magazine at the time and really got the band noticed.

A year later, another great album followed up, New Day Rising, along with more touring of course. All that touring and sadly I never got to see the band play due to either lack of funds, and more importantly lack of transportation! The next release, and their last for SST was Flip Your Wig which showed the band going more into the “post punk” or “college rock” direction. The songs were more accessible and didn’t have as much bite to them, but still remained quite good.

Following the release of that album, the band did something that was a really big deal at the time. They signed to a major label. They were being courted by a couple different ones but ended up signing to Warner Bros. I remember what a huge deal that was to the punk rock community at the time and it was talked and written about everywhere. Candy Apple Gray was their first major label release, and while a pretty good record, it wasn’t nearly as good as the previous ones.

After a couple singles the band released what turned out to be their final album, Warehouse: Songs and Stories which was another double album. At this point the band were splintering apart and not getting along. Their long time manager had passed away and after one last tour, which no one knew would be their last, the band gave up. The biggest rift was between Grant Hart and Bob Mould, who were likely wrestling for control of the band as both men were the songwriters. They had a unique setup, as whoever wrote the song would also be the one to sing it, they didn’t have a “lead singer”, they all would sing depending on what song it was and who wrote it, though as time went on, it was pretty much just Grant and Bob writing all the songs and singing them.

Picking just one Husker Du record to feature, and one song was a tough one because I love everything they have done. Sure not every record is a masterpiece, but even the weaker stuff was better than most bands and they never put out something that flat out sucked. I decided to go with the song that got me into them in the first place.

As always, if you have any additional information, or were in Husker Du and want to share some stories, please get in touch.

Way back in 1986 I hadÂ a promo copy of the first Skulls album, Dress Up and Die, sent to me from Buy Our Records. They used to send me records to review in my fanzine, Spontaneous Combustion. I played that record and...