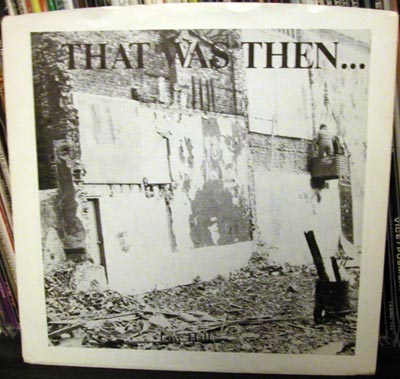 Selections from The Punk Vault [That was Then, This is Now]

This one flew under my radar when it was first released and I didn’t acquire one for about 2 years or so after it was released, when my friend Vince traded me his copy. While he liked Ruin, he hated the FOD song with a passion. That worked to my favor I guess because he ended up giving up this thing to me. I on the other hand, loved the FOD track. While to him it was just “noise”, to me it was hardcore gold!

This record was the first release on Plus Records, who also brought us records from The Serial Killers, Legitimate Reason, and a couple others. Pretty much everything on the label was good and they certainly got off on the right foot with this compilation. This comp features Ruin, Scram, Electric Love Muffin, and FOD, all of them were from Philadelphia, PA, as was the label.

This particular FOD song was recorded live. The studio version can be found on their Love Songs 7″. It is raw, fast and loud, and far more “hardcore” than the version on the aforementioned 7″. There was two pressings of this record. The first had a thin, glued sleeve and came with an insert and stickers. The second had a hard, folded sleeve, different back cover, and did not come with stickers. The labels were different colors as well and the second press adds “vol.2” on the label to indicate it is the second pressing.

As always, if you have any additional information, or were the person responsible for Plus Records, please get in touch.

Listen to “Meat Factory” by FOD from the record