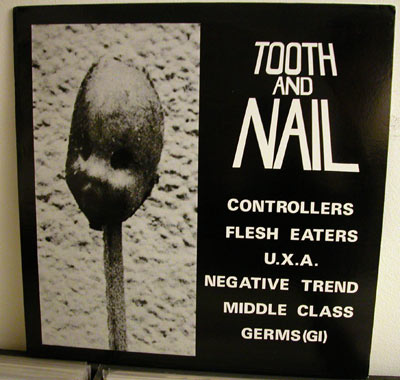 Selections from The Punk Vault [Tooth and Nail]

In the mid to late 70s, punk rock was exploding in California, especially in Southern California. A young punk rocker by the name of Chris D. was playing in a band called The Flesheaters and he put out a couple of their records on the label he started for that purpose, Upsetter Records.

In 1979, he decided to put out a compilation documenting some of the Los Angeles punk scene that was happening at the time. He produced all the tracks on this compilation, that was recorded at various studios across the LA area. An interesting tidbit was the inclusion of Negative Trend, who were a San Francisco band. The band was pretty much done at that point and Rik L. Rik was about to embark on his solo career with Posh Boy Records. Chris D. wanted the recordings for his compilation to be Negative Trend, even though the tracks were recorded as part of Rik’s solo sessions.

The lineup of this compilation is Controllers, Middle Class, UXA, Negative Trend, Flesheaters and The Germs. All the tracks were exclusive to this compilation, and many to this day have not been reissued. Each band had between 2-3 songs each.

Around 1989, Chris D, likely in need of some cash, did a second pressing of this record that omitted the inner lyric sleeve. Since then, the record has remained out of print and has not yet seen the light of day as a CD. I hope that gets remedied in the near future as Chris D has reissued much of the early Flesheaters material, so perhaps this will follow someday. Hell, I’d put it out on my label in a heartbeat given the chance!

As always, if you have any additional information please get in touch.