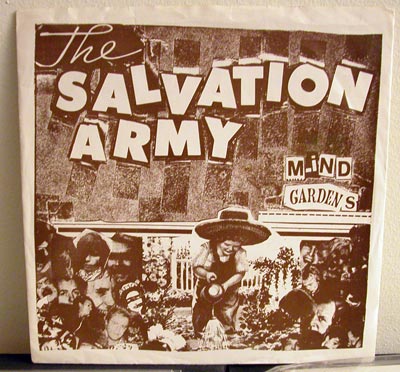 This record is another example of a record I bought not because I had read a review or heard the music before, but for the simple reason that it was on New Alliance Records. I have said this before but often times I would buy records just because they were on a label who put out other records that I liked and would figure it would be a safe gamble to buy something without hearing it if I like a lot of stuff the label had put out. More often than not it was a pretty good system, and one I will occasionally subscribe to even today (though not nearly as often).

Salvation Army started in 1980 and were from Los Angeles, CA. The members were:
John: Guitar
Troy: Drums
Ricky Start: Vocals/Bass

The band was a sort of psychedelic punk band and probably had a lot more in common with The Seeds than The Germs. They were together for about a year before they recorded and released this single on New Alliance. A year or so later, and a lineup change, they did an album for Frontier Records, after which they were threatened by the Salvation Army (you know, the people you send your old clothes too) for using their name, and the band changed their name to The Three O’Clock. They put out a few more records and even ended up signed to IRS Records after their second album.

The band broke up in 1988. One of the members went on to form Permanent Green Light, I do not know what happened to the others.

As always, if you have any additional information, or were in Salvation Army / The Three O’Clock, please get in touch.

Listen to “Mind Garden” from the record