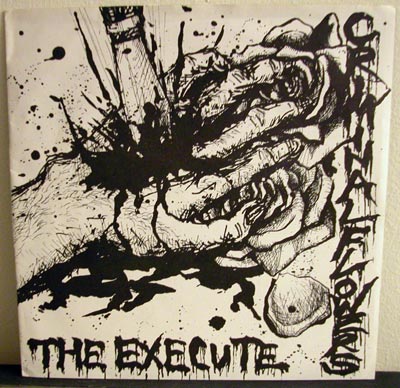 Selections from The Punk Vault [The Execute]

I’m kind of breaking tradition here as I am not covering a band from North America, which is the main scope of my record collecting/punk rock love. This time we are going to the other side of the globe, to a place where giant monsters roam free and my hero Godzilla hangs out at. Japan.

Aside from some really cool electronics, Japan also produced a handful of great hardcore bands and it didn’t matter if they weren’t singing in English, they kicked ass all the same. The Execute is my favorite of all the limited amount of Japanese hardcore I’ve heard. I first came to hear of them thanks to Pushead including them on the amazing (and now classic and shamefully out of print) Cleanse the Bacteria compilation. They had a live song on there called “Slash” that blew me away. I put it on every mix tape I ever made for myself back then for walkman listening on the bus to school. I wanted to find more by them, but since they weren’t from around here, and didn’t have very good distribution over on these shores, it would be years, and trades before I ever accomplished that task. The only other US release they were on was the split 12″ they had on Pushead’s label with Inferno.

There was an address to write the band on the Cleanse the Bacteria compilation. I am pretty sure I sent them a letter, but since I was too dumb to know what an IRC was (no, not the internet chat gimmick, I mean International Reply Coupon), I never got a response. I would discover much later that they had a handful of singles, one flexi (which I STILL need!), and a 12″ out during their hardcore era (the 12″ is what ended up being their side of the aforementioned split 12″, it was its own EP in Japan called Blunt Sleazy).

The band started around 1981 or so and lasted until around 1989. Somewhere along the line, two of the original members, Baki and Baby, left The Execute to start their own band, Gastunk. The legend has it they did not agree with founding member Lemmy Yamada about the direction of the band, and his desire to change the sound to be more like later TSOL or Samhain. Gastunk picked up right where The Execute had left off in regards to hardcore, but ironically they’d quickly change their sound too to be more rock, while The Execute had become more of a goth type band.

Lemmy forged on with new members and put out an album called The Antagonistic Shadow in 1988 which showed this new sound, and you’d be hard pressed to guess it was the same band that was responsible for such great hardcore records a few years prior. It wasn’t long after that when he must have called it quits as it was the last anyone heard of The Execute.

All the early works at one time were collected onto a LP titled Save Your Money in 1988, but sadly that has been out of print for longer than the band has been defunct. That album was bootlegged recently, retitled Spend Your Money and sadly that is the only way anyone these days can hear any of their music.

As always if you have any additional information, or were a member of The Execute, please get in touch.

Listen to “Slash” from the record