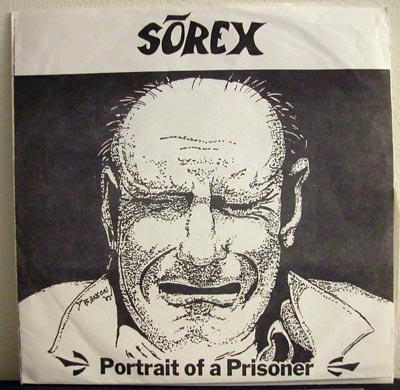 Selections from The Punk Vault [Sorex]

This is a unique story as I had never heard of the band Sorex before until late last year when a regular reader of this site would comment from time to time and occasionally mention his band having played with some of the bands I was writing about. I emailed him to find out that his band was called Sorex, and they put out only one 7″ in the mid 1980s. The man’s name was Andy and sadly the only copy of the 7″ he had was his own personal copy and he didn’t have any to spare. He did, however, attempt to find one for me and gave me a short list of people he found that at one time had one for trade. It was one of thsoe people that pointed me to another fellow in Germany who had a copy for trade and a deal was struck and the record arrived today as a matter of fact.

Awhile back, Andy sent me the Sorex story that he penned for the Kill From the Heart site. It is as follows.

Sorex forged its way into the world of hardcore music in the summer of 1984 in drummer Dave Benson’s Redondo Beach (California) garage. The foursome hammered out a ball of noise at first, but the boys would end up penning some pretty decent songs along the way.

First came the band’s debut gig at the infamous Cathay De Grande in Hollywood in the fall of ’84, and then Benson — along with singer Andy Nystrom, bassist John Dieter and guitarist John Hacker — soon recorded a 10-song demo tape in a garage studio in Redondo. (Jerry Urczek was the original guitarist and would return to the band about a year later).

In early 1985, another guitar player, Tom Cornejo, stepped into the fold and handled the axe duties on the band’s only vinyl offering, the three-song Portrait of a Prisoner EP. Only 200 of the records were pressed, and in the year 2000 Nystrom received word that someone in the Portland, Oregon area paid $50 for a copy. The lead-off song, “Tell Me the Rules,” is included on the prestigious Hyped 2 Death #2 compilation, which was repressed in 2004.

During the band’s 1 1/2-year existence, the boys played a few shows in the L.A. area and a pair of biggies in Berkeley (with Broken Bones and Special Forces) and Reno, Nevada (alongside the Circle Jerks and 7 Seconds). The Reno show was actually in nearby Sparks and took place in a former church with the bands playing on the “altar” … Sorex opened the show and blessed the crowd with its jarring Adolescents-meets-The Germs aural attack.

The Reno gig would prove to be the band’s high point and, unfortunately, one of its last gigs. Sorex’s time was brief, but the boys kicked up a racket every step of the way.

Thanks Andy for the story, and for introducing me to your band.

Listen to “End Result” from the record.