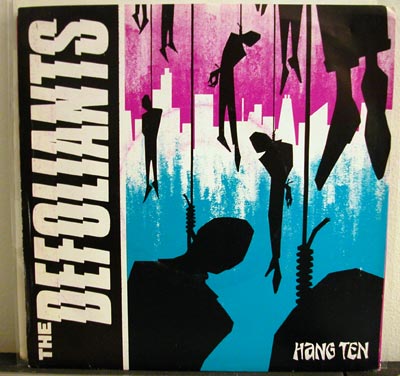 Selections from The Punk Vault [The Defoliants]

I remember seeing The Defoliants name on plenty of flyers around the city, they would be one of the opening bands for various shows in town. I finally got to see them when they opened up for Naked Raygun sometime around 1987. I forget where, but I am pretty sure it was at the Riviera. I thought they were very entertaining and it was soon after that I picked up their 7″, which had just come out and was their only record at the time.

Sadly, many years ago, in what I like to refer to as “the great depression” I wasn’t working for a long time, was broke, and ended up selling a bunch of records to make some much needed money. It stands as the biggest mistake of my life and it took me a long time to replace all those records a few years later, and a couple I still haven’t been able to replace (The Misfits – Bullet 7″ on black vinyl being the biggest culprit). This Defoliants 7″ was something I always wanted to replace, and then had trouble finding again. It wasn’t that the record is super rare, I passed up a few here and there, mostly because they were being pimped by scumbags like Zeroboys78 on ebay, who I wouldn’t buy a record from just on principle.

Well, finally, thanks to my pal Greg Dunlap who located a copy for me, I am happy to report the record is back in The Punk Vault, and I am happy to have replaced it. Greg also happened to know someone who played in the band, a gentleman by the name of Rob Warmowski, who was kind enough to share The Defoliants history that he put together.

The Defoliants
“Not unlike Agent Orange crashing headlong into Naked Raygun” – MRR, 4/85

A trio formed in Chicago in 1984 by Mather high school chums Rob Warmowski (bass, vocals) and Jeff “BBQ” Cohn (drums), adding Chuck Uchida on guitar soon after. The Defoliants were influenced by hardcore punk, surf/garage music and pop culture. We were known for a strong live show and a nerdy sense of humor, belting out a speedy hybrid of alien punk-pop mated with surfy instrumentals. Appearing often with Chicago punk mainstays such as Naked Raygun and The Effigies, our songs and sound struck a (reverby) chord with disaffected loners, rock and roll essentialists, hardcore kids and others found in the under attended 1980s Chicago punk scene. Our finest moment may have been opening for Fugazi’s Chicago debut at Club Dreamerz.

We appeared on a WNUR Northwestern University radio compilation. We recorded an LP with the legendary Iain Burgess (Black Box Studios) engineering. It was released by West Berlin record label Angry Fish.

We wrote a TV commercial soundtrack for a Schwinn BMX bicycle. We had a song in one movie “The Borrower” starring Rae Dawn Chong. We started recording a second LP in Chicago with Burgess in 1989. That year, we toured the toilets of Europe. We broke up in 1990 without completing the second LP.

Rob is now recording as the San Andreas Fault www.thesanandreasfault.com
Chuck Uchida is now in a group called The Sonnets. Jeff was in The Crown Royals (Estrus).

Cassette: “NOW How Much Would You Pay For It?”
Recorded at SotoSound Studios – 2 track live, Evanston, IL 1985

Bad Day At The Beach
I Wish You Were Fiction
Cold Start 64738
Came/Saw/Conquered
Don’t Eat The Dieffenbacchia
Rectal Inferno
Code White
Can’t Lose
Speed Racer
Final Notice Prior To Disconnection
Wild, Wild World of Animals
Up Against The Mall
(and others, sorry I’m blanking)

Mass
Whitecap
The Guy Who Got Mad
Mr. Spy

Thanks Rob for the great info, and thanks Greg for your aid in replacing something in The Vault that was sorely missed.

Listen to “Mr. Spy” from the record