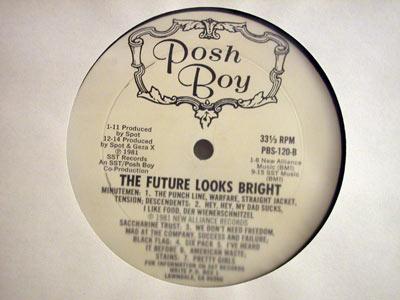 Selections from The Punk Vault [The Future Looks Bright]

When I was a teenager, I picked up a Posh Boy compilation called The Future Looks Brighter based solely on the fact that it had Social Distortion on it and I was a huge fan of that band. Upon reading the liner notes while proceeding to wear holes in my first copy of that record, I came to learn that there was originally a cassette compilation that preceded it called The Future Looks Bright and there was part of a photo of the cover on the cover of this compilation.

Not having been a big fan of tapes, even back then, the original came and went well under my radar. Hell, for all I know, it never made it as far as my area back then as there wasn’t many stores stocking this new kind of music until closer to the mid-80s. In fact to this day, I’ve never gazed upon an originally cassette copy. At the same time, there was a promo-only vinyl version of this compilation sent to radio stations and there was only 500 of them pressed. Eventually, and way before there was an ebay to get anything you are looking for so long as you have deep pockets, I was able to secure a copy in a trade and it has remained in the vault ever since.

This comp was like a match made in heaven, or hell depending on your point of view, as two of the best CA punk labels of the time, SST and Posh Boy, teamed up on this comp. Each side featured artists from the respective label. These days its a who’s-who of early Southern California punk rock. How did two labels, operating completely independent of each other come to join forces you ask? Well, why don’t we let Posh Boy himself, Robbie Fields, answer that one.

Well, I wasn’t thinking of making money. It was a cassette release, after all, selling at Music Plus for $3.99.

It was conceived of as a promotional vehicle for the groups on it and for punk rock availability on cassette, as up to that point, very little from the genre had been been released on cassette as opposed to vinyl.

It was a period – mid 1981 – that I was speaking with SST almost every day about various problems facing us. We were allies. There had been pitched battles at the Fleetwood between South Bay punks and O.C punks. TSOL were threatening to kill me … TSOL were definitely a rival band/gang to Black Flag. I was basically crying on their shoulders.

For their part, SST were in awful financial condition after they had made a very poor business decision the previous year in going in with Unicorn. Black Flag were actually living on the premises at Unicorn Studio on Santa Monica Blvd. and had already arranged for me in the Autumn of 1980 to book an evening of studio time there to record (within a 3 hour block!) both the Circle Jerks and Adolescents.

At this time, my finances were marginally better than SST’s and when they asked me to front the credit at the printers for the first 10,000 covers of Damaged, I obliged. I was to receive, I think 500, finished albums for sale. The deal went sour for them, as Unicorn obtained an injunction against their releasing it themselves and no albums were delivered to me.

I quite understood their position and I never put pressure on them to make good on the deal. In fact, once they got Daphne off their backs, SST did provide me with a significant quantity of product for me to sell and recoup the money I had fronted for the covers.

Meanwhile, I was doing these massive and expensive promotional mail outs of Posh Boy releases. I liked to put 6 releases in a mailer … there was always something awesome among the releases. So I told SST, let’s do this cassette only release, one side Posh Boy bands, the other SST bands and I will press up 500 vinyl copies with printed white labels for my next promotional mail out. This was heavy duty promotion that I was offering for free and so they jumped at it. Of course, I saw it as synergistic. We would all prosper together. At the same time, they decided they wanted to have a single out and “gave” me the Louie, Louie single. And that formed part of the 6 pack of singles that I released in late 1981.

It may have been a pretext, but the Louie, Louie single proved to be the strand that unraveled the relationship between SST and Posh Boy. Roadrunner Records had just started in Holland and they licensed separately from me and Unicorn, the Channel 3 Fear of Life LP and the Damaged LP for release in 1982.

Roadrunner then proceeded without my permission or Black Flag’s to add the Louie, Louie single tracks to the Dutch release of the Damaged album. Greg and Chuck were furious and felt betrayed by me and there was nothing I could do to persuade them that I also had been ripped off by Roadrunner. Now it was Black Flag’s turn to make my life very uncomfortable. Even though I owned the Louie, Louie single I gave back the rights to them in 1983 and decided to take off the SST bands and re-release The Future Looks Bright as the The Future Looks Brighter. A fantastic, co-operative relationship was in the toilet, with SST riding the crest of success while Posh Boy began its long decline.

An interesting thing about this record is the Descendents tracks seem to be either different mixes, or in the case with the track posted here, a different version than what appeared on their Fat EP. Since this was a split label release, it would be unfair to not represent the Posh Boy side, so you get the finest CH3 track ever committed to vinyl. Many thanks Posh Boy for the info and of course, the fine punk rock!

Listen to “Hey Hey” by the Descendents

Listen to “Manzanar” by Channel 3