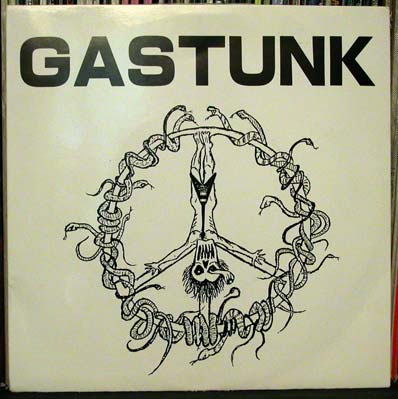 Selections from The Punk Vault [Gastunk]

Gastunk is another one on the fairly short list of non-North American punk/hardcore bands I collect. I first heard of them when Pushead put out one of their albums on his long-defunct Pusmort Records. By the time that record came out, the band had already been around a few years. They had been putting out records prior to that in their home country of Japan, and actually those earlier ones were among their best.

I’d later find out that Gastunk was started by Baki and Baby from The Execute, who are probably my all-time favorite Japanese punk band. I noticed a similar sound between the two when I got those early Gastunk records, which made sense to me once I learned of the shared members. The best I can tell is the band formed around 1983 and I believe this is their first 7″. They did a handful of singles and a few LPs before breaking up. As time passed, their sound changed from hardcore to a more rock/metal sound. Aside from their album on Pusmort (which he licensed for release in the USA), none of their other records were released over here in the US, and were pretty hard to come by. I can tell you this 7″, as well as their Dead Song LP are well worth seeking out. In doing some searches in hopes of finding more information to share (which sadly came up empty), I noticed that over in Japan, all their material has been released on CD, which unfortunately would cost a lot to buy as an import. Perhaps someday a US label will license it for release over here as it certainly would be worthy (as would the early works of The Execute).

As always, if you have any additional information to share, or were in Gastunk, please get in touch.

Listen to “Sex” from the record.

Gastunk’s official website (not in English, but you can see a translated version here)