Tonight I went to see the Minutemen documentary, We Jam Econo over at the Gene Siskel Film Center with the Demon (who graciously offered to drive). The place is in the heart of downtown, right near State/Lake streets. I had never been there before, and I’m not sure I had even heard of it until now. Its a small, clean, theatre with a couple small rooms that hold maybe a hundred people or so each. Its definitely made for art films and independent films, not for things like Star Wars. 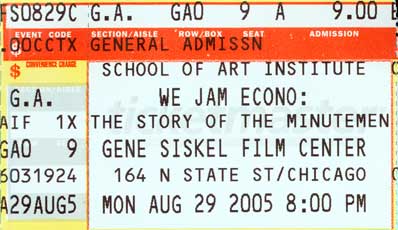 Being a huge Minutemen fan ever since I first heard them while I was in high school (in the early/mid 1980s), I was really looking forward to seeing this when I found out about it. I thought I’d have to wait and hope for a DVD release but I lucked out and spent money that should have gone to eating, or paying a bill, to buy my ticket. I am happy to report that the choice was a wise one as it was money well spent.

The movie tells the story of the band from how D. Boon and Mike Watt met, though how they started playing music, how they met George Hurley, how the band came to be and the tragic end with D. Boons untimely passing. The film mixes modern day interviews with the surviving members (mostly Watt) as well as fans and their peers from other bands such as Greg Ginn (Black Flag/SST Records), Joe Baiza and Jack Brewer (Saccharine Trust), Flea (some over-rated band and one fine bass player in his own right), Byron Coley, Thurston Moore (Sonic Youth), Ian MacKaye, Henry Rollins and lots more. They also interview friends and family. Mike Watt takes the viewers on a tour of San Pedro, showing the place he met D. Boon for the first time, where they practiced for the first time and where they played their first show when they were still known as The Reactionaries.

There is also plenty of cool (but somewhat raw) footage of the band playing at various clubs at different stages of their career including such now infamous places like the Starwood and Cathay De Grande. It was pretty cool to see such historic footage and I was especially glad because back when I was in high school, I once passed up going to see the Minutemen play once at the Metro thinking I’d just catch them when they came back and sadly that never happened because of the accident that robbed the world of the talented D. Boon.

You also got a glimpse into the brother-like relationship of Boon and Watt and how that resulted in their forming of one of the most unique (and influential) punk rock bands of all time. You can tell how much both surviving members loved their band-mate and friend and how much they still miss him. You also got to see and hear about the unique bond those three shared and how it produced such amazing results and what they put up with early on in their career just to play music (the band were often spit on by the crowds who didn’t think they were hardcore enough).

Visually the film looks homemade. The modern-day footage is grainy and often times over-exposed. I don’t know if this was due to a low budget, or an artistic decision. The look of the modern stuff and the way it was shot does help it fit almost seamlessly with the older footage shot on much more primitive equipment. I really enjoyed the way they told the story from beginning to end, and they covered almost every record the band released and talked about how it was made. Did you know that Buzz or Howl Under the Influence of Heat cost them a mere $50 to make?! I sure didn’t.

90 minutes after sitting down, the film was over and I got up both happy that it was so well done and did justice to the legacy of the Minutemen as well as being very educational, but also a little sad because I recalled how depressed I was when I was a kid and heard about D. Boon dying in that car accident. They were such a huge band to me back then and I knew that the world of music has suffered a huge loss and as a fan I suffered a loss of one of my musical (and punk rock) heroes.

Hopefully this will come out on a DVD as it deserves to be seen by anyone who has not only called themselves a punk rock fan, but also a music fan in general. I know I’ll be the first in line to purchase it when that day arrives.